Seagate: Who us... no flash cred? Check out our PCIe card, suckers

Joins flash mob in earnest, pushes out SATA and SAS SSDs too

This is one of Seagate's big flash guns and is built using 21nm Samsung MLC flash and has a 12Gbit/s SAS dual-port interface. The capacity levels are 200GB, 400GB and 800GB. Here's the performance data: 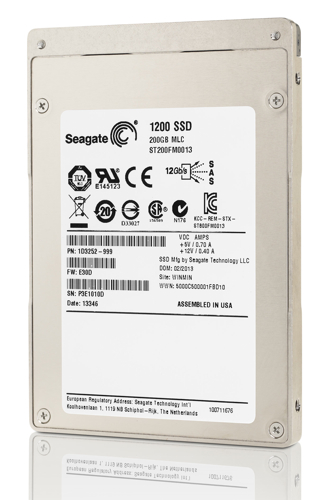 It has a lower average failure rate at 0.44 per cent and the 800GB product can have up to 14.6PB written over its five-year warranty period - 10 full drive writes a day. It comes with encryption and has an instant secure erase feature.

The 1200 High Endurance version once again trades off some capacity for endurance and its capacities are 100GB, 200GB and 400GB - quite a savage drop, but endurance rises to 18PB written for the 400GB version.

The X8 Acelerator product is built with Virident technology and is effectively a tweaked Virident FlashMax II. It uses Micron 25nm NAND, Seagate is using three different foundries for its flash at present, and has a HHHL - half-height, half-length - 8 lane PCIe 2.0 interface. The capacity levels are 550GB, 1.1TB and 2.2TB.

Here is its performance profile: