Vid German boffins have discovered that two microscopic magnets glued together can create a radio antenna capable of transmitting into the GHz band - where mobile phone signals and other tech lies.

The disks are only 500 billionths of a metre wide and 10nm thick, so even once a pair of them are stuck together with a similarly sized non-magnetic layer between them, the overall component is still bloody small. At the centre of the resulting disk is a stable magnetic vortex allowing the device to transmit radio signals. It paves the way for a new generation of tiny antennas.

Details of the research appeared in Physics Letters, in a paper authored by researchers from the Helmholtz-Zentrum Dresden-Rossendorf working with fellow boffins at the Paul Scherrer Institute (PSI). While the study is traitorously complicated, the implications are significant.

The existence of vortices in nanoscale magnetic disks has been known for a while. Various researchers hope to exploit them as computer memory, but the breakthrough here is the discovery that two stupidly tiny magnets will stabilise each other and thus permit high-frequency transmissions.

A magnetic disk 500nm across has north and south poles circling it, as though one has taken a chain of bar magnets and attached the last to the first to make a circle, a series of which make up the disk. But as one approaches the centre of the ring there is no longer room for our chain of poles so they're obliged to stand up, or point down, and it's this duality of position which lends itself to computer memory.

Apply a voltage to the disk and the vortex spins and emits radio waves. This is fine to a point, although once the frequency starts to get anywhere useful the polarity reverses and the spinning stops and has to be run up again in the opposite direction - not ideal for contiguous transmission.

Which is where the second disk comes in. Once the two disks are glued together the circular pattern of bar magnets goes into three dimensions: as well as curving around the disk our hypothetical magnets curve into each other creating something akin to a torus, stabilising the vortex core which can now be spun at much higher speeds. 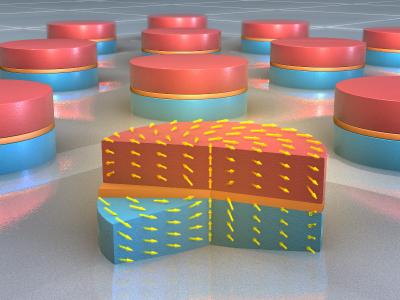 My chips are in pole position ... how the magnets work

We’re still a long way from nanoscopic transmitters, at the spark-gap stage of magnetic radio, and these projects are as much about understanding what magnetism can do as finding practical applications for it. As we learn more it's becoming clear that magnets still have enormous untapped potential.

To demonstrate that, and prove that not all magnetic innovations need electron-beam lithography, here's a video of an amiable old man showing a Star Trek tractor beam in action: