Exotic nuclei point shed light on a mystery of existence

It's only a small thing, but it could be big news: researchers at CERN have turned up the first evidence of exotic (and short-lived) atoms with pear-shaped nuclei.

The reasons the boffins are excited is they believe the eccentric nuclei can help them probe one of physics' official Big Questions: how come there's something instead of nothing?

Instead of the more typical profile for a nucleus – spherical or elliptical – the “pear shaped” nuclei were created by whacking beams of radium and radon atoms into targets of nickel, cadmium and tin, using CERN's ISOLDE ion separator facility. The collisions excited the nuclei to energy levels at which they revealed their internal structures via the patterns of gamma rays they gave off.

According to University of Michigan professor and co-atom-squeezer Tim Chupp, the pear shape “means the neutrons and protons, which compose the nucleus, are in slightly different places along an internal axis.”

That's special because the placement of the neutrons and protons provides hints at the subatomic interactions taking place.

Drilling into this is tortuous, but let's make the attempt. The reason this universe exists and we're here to wonder about it is that for some reason, back at Big Bang time, we ended up with a small asymmetry: there was more matter than antimatter. If matter and antimatter had been perfectly in balance, they would have annihilated each other.

To make the quest for a reason even more tasty: there's nothing in the Standard Model that predicts the matter-antimatter asymmetry. 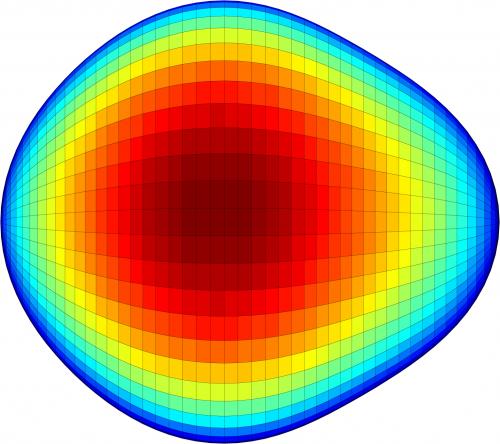 Graphical representation of the pear-shaped nucleus.

Hence experiments such as this one: the researchers hope exotic atoms will hint at interactions that aren't seen in normal matter, and that by analysing those interactions, they can shed light on why we're all here.

One suggestion is that a type of interaction not yet written into the Standard Model exists – and if it does, its nature might be revealed in the relationship between the axis of atomic nuclei and their spin. In the pear-shaped nuclei, nuclear forces are presumed to be pushing the protons away from the centre of the nucleus – and that's what has Chupp's interest.

“It produces the matter/antimatter asymmetry in the early universe and it aligns the direction of the spin and the charge axis in these pear-shaped nuclei,” he told Phys.org.

The work has been published in Nature (abstract here). ®