Symantec: We 'stubbed our toe' on Backup Exec, but we'll be fine

Analysis Symantec's new broom CEO has presided over record final quarter - at least for revenues - and full year 2013 results. This is despite the company being in the middle of a management clear-out, profits droop and wholesale sales operation revamp.

Revenues for the fourth quarter, which finished on 29 March, were $1.75bn, a record and 4 per cent higher than a year ago, but down three per cent compared to the third quarter. But this is a traditional Symantec seasonal revenue pattern and so nothing to get excited about.

Full fiscal 2013 revenues were $6.9bn, a sort of respectable 2.5 per cent higher than a year ago. Profits were $765m, 24 per cent less than the figure in 2012 which was buoyed by the aforementioned exceptional final quarter's profit.

CEO Steve Bennett, about six months into his job after the departure of Enrique Salem, said of the results: "In a year of significant leadership changes and development of a new company strategy, the team remained focused on running the business to deliver better than expected results. Our focus on operational change and repositioning the business in fiscal year 2014 will set the foundation to drive better execution long-term. Never have I been more optimistic about the opportunity in front of us to make a difference for our employees, customers and shareholders."

The product segment information was revealing.

Annual revenue from Symantec's backup, archiving and Storage and Availability Management businesses grew five per cent. Within that :

The consumer business needs an energising kick up the backside, and the Storage and Availability Management business needs two of them. CFO James Beer said: "Backup Exec has been something of a challenge, and we continue to work through and improve upon our offerings in the Windows market there."

He added: "We're still experiencing challenges there impacting Backup Exec's revenue double-digits. Now I would expect that, that will improve gradually. I think the most material opportunity for us to improve with Backup Exec is around the next release that we're very much working on but won't be out for some time yet later in this fiscal year.

"We've made a lot of changes in the team that stubbed its toe in the release on Backup Exec... This was our execution that caused us the problem, nothing else, as witnessed by the real strength we've had on NetBackup where we didn't stub our toe." Now the same team manages both NetBackup and Backup Exec. 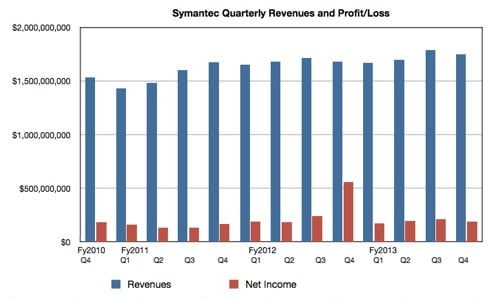 The earnings call had Steve Bennett talking about Symantec 4.0 and boasting: "We grew three per cent organically, the largest organic growth rate in five years."

He said: "FY '13 also was the start of the transformation of Symantec. The only significant things that changed during the year were some executive transitions and the January announcement of our new strategy, an organisational simplification initiative." Then he turned to the next 12 months:

FY '14 will be different. Many critical things will be changing like completing the streamlining of our management structure, reallocating significant amounts of our development resources to focus on our most promising point solutions, exciting new integrated offerings and some exciting new partnerships we haven't announced yet but expect to in the next 90 days.

We're also changing our go-to-market strategy in many of the elements, like the creation of a new renewals team, focusing our sales organisation on new business only, changing our sales compensation program, converting our generalist sales force to one that's specialised and focused on either Information Management or information security, introducing a new channel strategy and set of partner programs and building a high-powered marketing organisation, to mention a few of the most critical.

Bennett is in the process of junking the Salem-era Symantec structure and recasting it. He's certain that these changes will "lead to significantly improved longer-term performance for Symantec," although the fiscal 2014 somewhat outlook is uncertain.

Bennett is on a middle management dead-wood clearing exercise:

We are reducing the number of layers and increasing spans of control for our managers to industry standard levels in an attempt to increase the speed of decision-making and to improve accountability and execution.

We expect to eliminate between 30 per cent and 40 per cent of our management positions. We will have fewer, bigger jobs for our best and brightest. We are also attracting world-class talent from the outside, some of the most recognised tech companies in the world. Over the next few months, you'll hear more about some great senior-level talent coming to join and strengthen the Symantec leadership team."

Music to the ears of Symantec's exec recruitment agencies.

Management in the security products area is being re-organised:

We see real value in merging our Norton and SEP solutions to solve new customer problems and reduce redundant expenses. Moving from protecting the endpoint to protecting people and their information in a device-independent way will help us transform this business.

Norton OEM deals have some doubt hanging over them: "In the short term, we expect the Norton business to deliver flattish revenue growth given market dynamics, including PC unit declines. … Given how this market has evolved, we are taking a rigorous look at every partnership deal. We will not sign any new agreements that don't make financial sense. Moving away from any OEM distribution partnership would put some pressure on our new customer acquisition in the short term but would be materially accretive to the bottom line."

Symantec is moving more to e-commerce to acquire customers directly and less through PC-based OEMs. It's also moving away from having 150 different point products to integrated product offerings. Weak point products didn't work. For example, Bennett said about the storage management products: "This is technology that can solve important problems when we redeploy it and think differently about it, and we got into trouble as a company thinking about it as a standalone business."

The company has decided to pay a $0.15/share dividend which should please shareholders. Fiscal 2014 should see zero to two per cent revenue growth. Next quarter's revenue is expected to be lower than a year ago due to a weak yen and seasonal trading patterns.

We just have to wait until 2015 for Bennett's Symantec 4.0 to deliver the promised goods. ®