Or feed them to cattle, pigs, chickens, and fish, then eat them

World population is slated to top nine billion by 2050, and seeing as how arable land is being rapidly swallowed by towns and cities, oceans are increasingly overfished, and climate change is disrupting traditional farming, a new United Nations study proposes a twist on Marie Antoinette's dietary advice: let them eat bugs.

"Common prejudice against eating insects is not justified from a nutritional point of view," write the authors of a 191-page report (PDF) released by the United Nations Food and Agricultural Organization (FAO) entitled "Edible insects: Future prospects for food and feed security".

Bugs are not only good eatin', say the authors, but they're also highly efficient sources of nutrition. Your average insect, the report claims, requires a mere two kilograms of food to produce one kilogram of what it charmingly refers to as "insect meat", a far better feed-to-food ratio than, for example, a fatted calf, which requires eight kilograms of feed to produce one kilogram of beef.

Two billion of our current seven billion fellow travelers have already welcomed bugs into their diets, the report contends. Over 1,900 insect species find their way into our alimentary canals, with beetles being the most popular at 31 per cent, followed by caterpillars at 18 per cent; bees, wasps, and ants at 14 percent; and grasshoppers, locusts, and crickets at 13 percent. 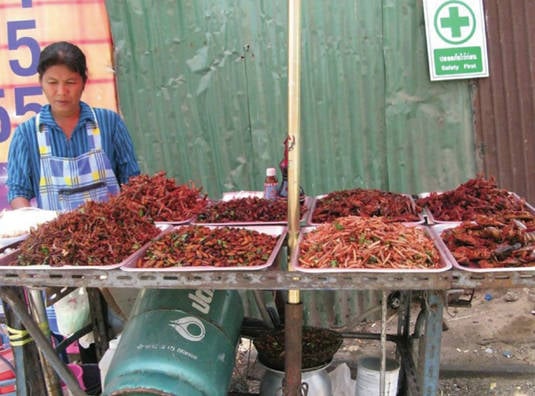 Insect snacks on sale by a street-food vendor in Bangkok, Thailand

Oh, and those sex-starved cicadas that are so much in the news these days? They're "highly esteemed as food" in Malawi, the report reminds us. They were also highly esteemed by Aristotle, who wrote in his Historia Animalium that female cicadas taste best after mating because they're then full of eggs.

The report does admit that gourmet buggery may not be an easy sell. "Western societies still largely averse to the practice of eating insects will require tailored strategies that address the disgust factor and break down common myths surrounding the practice," the authors write.

One of the barriers to widespread acceptance of roach roulade or cricket en croute is the Western perception that eating bugs is a dinner-time strategy only for the desperate. "Contrary to popular belief," the report retorts, "insects are not merely 'famine foods' eaten in times of food scarcity or when purchasing and harvesting 'conventional foods' becomes difficult; many people around the world eat insects out of choice, largely because of the palatability of the insects and their established place in local food cultures."

It's may take some of the best minds in marketing to sell Westerners on mealworm meals, but "Although it will require considerable convincing to reverse this mentality, it is not an impossible feat. Arthropods like lobsters and shrimps, once considered poor-man's food in the West, are now expensive delicacies there," the report argues.

"However, the emotion of disgust can be very hard to change." 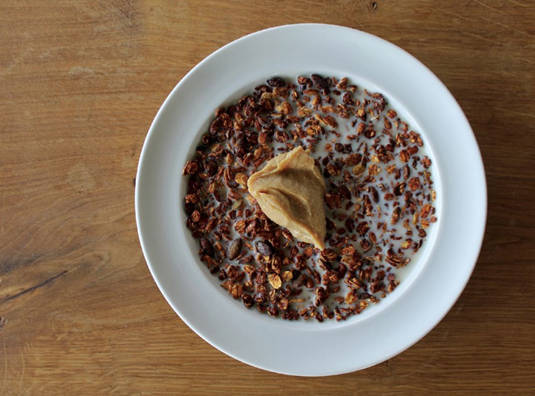 But if we picky Westerners continue to stubbornly shun grubs and flies, the authors recommend that we should at least investigate fattening our future mammalian, avian, and piscene edibles with Animalia Arthropoda Hexapoda Insecta.

In addition, the report contends, "Black soldier flies also make manure more liquid and thus less suitable for housefly larvae, and their presence is believed to inhibit oviposition by the housefly." Bonus!

That said, the common housefly maggot also has feedstock promise. "Maggots are important sources of animal proteins for poultry: they have a dry matter of 30 percent of their total wet larval mass, 54 percent of which is crude protein," the report reports, adding that "Maggots can be offered fresh, but for intensive farming they are more convenient as a dry product in terms of storage and transport."

Good to know. By 2050, those conveniently crispy dried maggots may not merely be fattening your KFC Extra Crispy, but may also be on Mickey D's menu as Maggot McNuggets. ®