And the VTOL hybrid job to follow, promise engineers

Analysis Not long ago the famous Massachusetts startup Terrafugia caused something of a stir by releasing details of a new electric hybrid flying-car design, the TF-X - though the company is now very late in delivering even its less-radical Transition design. 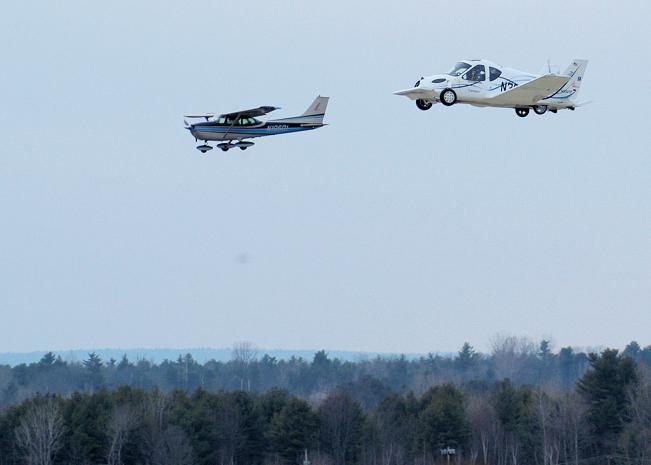 We here on the Reg flying-car desk have always liked the idea of the Transition - unlike most personal air vehicle schemes there is nothing wildly ambitious about it and it's easy to imagine it really being built and sold. Also, again very differently from most of its competitors, the Transition has actually had test flights.

Regular readers will no doubt be familiar with the Transition. In essence it's a simple idea: a plane which can fold up its wings and drive safely on roads. It's not meant to take off outside your house and land on your office roof or anything - rather, it would take off and land at normal airstrips just like any other light aircraft. But then, rather than having to be tied down or put into a hangar while its pilot arranged ground transport onwards, it would simply drive out of the airport gate to wherever he or she was going and park just like a car.

It's not a machine for the daily commute, nor is it a flying car for everyone: an expensive and troublesome-to-obtain pilot's licence is required to fly it, albeit a somewhat less onerous sport-pilot ticket as opposed to a normal private pilot qualification.

In the event of bad weather, which generally grounds ordinary private pilots who don't hold expensive professional instrument ratings, the Transition owner would simply drive the whole way on the ground.

But not so simple to actually get into production, it turns out. Terrafugia had hoped to be delivering Transitions in 2009, but has yet to ship its first one. A prototype did fly that year, but after tests were completed the Transition design was altered significantly and another prototype took to the air last year. Production had been expected to start shortly thereafter, but in fact it has not - and, perhaps ominously, the company no longer much cares to say when it might.

Against that sort of background, it seemed more than a bit worrying when Terrafugia splashed new CGI video and press releases this week which said nothing about the Transition - but instead outlined radical plans for a full-on Jetsons style flying car. The TF-X, expected in "eight to twelve years" has everything that the Transition doesn't. It's quiet - perhaps quiet enough to operate in urban areas. It can take off and land vertically. Anyone can fly it, as it doesn't need piloting as such: you simply tell it where to fly to and it does the rest.

That's a car which could potentially set down on the office roof - or in the parking lot anyway - having lifted off from the owner's driveway. And in true tech-trendy style it uses a partly electric, hybrid propulsion system, fashionably including the ability to plug in to a power outlet for recharge.

All in all, then, the TF-X is a lot less intuitively plausible than the Transition - and given Terrafugia's tight-lipped stance on the Transition, and its keenness to speak of the TF-X, it was possible to suppose that the company had gone the way of too many other flying-car inventors - long on vapourware and CGI, and short on actual working hardware.

So we got in touch with the people at Terrafugia and asked a few questions.

Firstly, we wanted to know what's going on with the Transition - the flying car that might actually get delivered in the near future. Terrafugia spokespersons confirmed what we had suspected: that another redesign has been found necessary following the most recent set of flight and ground tests. Another prototype will appear once this has been done, which will then be tested in its turn - and if all goes well, production and deliveries will commence at last. And this process will take a couple of years at least, as it did last time.

In the company's own words:

We want to assure the public that bringing Transition to market remains our top priority in the near term ... 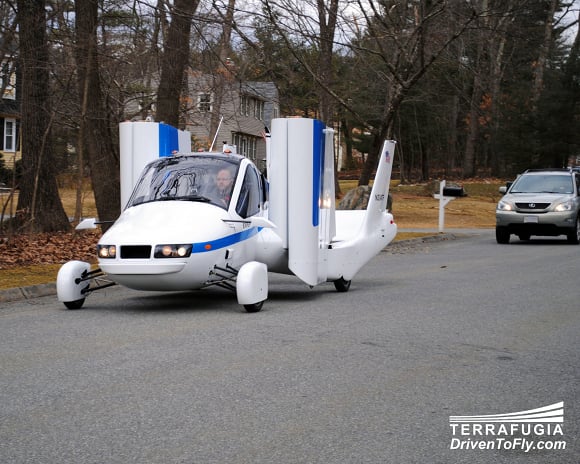 We are working on an additional redesign cycle now that was not anticipated at the beginning of the program. This redesign will address some issues that were discovered during the testing that has been ongoing for over one year now. After this redesign is complete, Terrafugia will build a body-in-white (BIW) for physical crash testing, a drive test mule, and what we expect to be our final flight test prototype prior to production. Depending on what happens with the crash testing, first delivery is estimated to be between January 2015 and March 2016.

By that point Terrafugia will be perhaps seven years late on actually collecting money from customers, which raises the obvious question of how the company will keep paying its bills during this long delay. But it seems that Terrafugia's backers remain confident the firm will come good:

While it is obviously true that we missed our early estimates, we also have continued to show significantly more risk reduction per dollar invested than our investors expected. In our opinion, and the opinion of investors who are writing checks to fund the company, the investment value and return potential is significantly higher today than it was when the company started. We continue to attract more investment as we show progress toward bringing a product to market, reduced risk, and now a much higher long term growth potential for the company.

So the Transition third iteration is apparently funded, and if it can tick all the boxes it will be in customers' hands in a couple of years. Perhaps the engineers at Terrafugia could even squeeze in a bit more useful load in the current redesign: as we've pointed out before, the last reworking left the craft with so little that it had become basically a single-seat machine if it was to take off fully fuelled (though two passengers and some light luggage could lift off safely if the tank was half empty).

So your actual real flying car is still on the way, or at least there's a reasonable chance it is.

Next page: But I'm not a pilot, and I hardly ever drive past a couple of airstrips during a journey. What about me?
Page: