We need to talk about Kevin

BlackBerry's new Q5 QWERTY smartphone was revealed today as "youthful and fun", rather distancing the device from its pinstripe pocket-dwelling siblings, the Q10 and Z10.

The Q5 a mid-range sibling to the first BlackBerry OS 10 QWERTY phone, the Q10, which we reviewed here last week. But somewhat surprisingly, the BB10-powered Q5 does support LTE, the next-gen mobile internet connectivity standard.

Under a 3.1in screen, the keys resemble those of the popular BlackBerry Curve, except the keyboard doesn't have, er, actually have a curve. It comes in black, white, red and pink.

And it's fairly crucial to BlackBerry's immediate future. 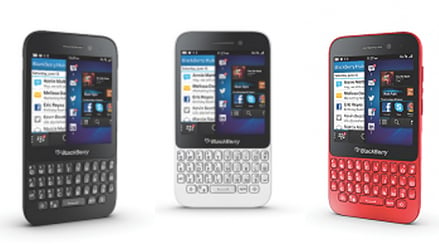 Another QWERTY BlackBerry ... the mid-range Q5

The Canadian company never had much of a consumer market in the United States, but in other parts of the world it's de rigueur. In the Philippines or Indonesia, for example, the "subscriber identity" is not the SIM but the BlackBerry Messenger (BBM) handle.

In the UK BlackBerry retains a huge install base among the yoof, although it has never broken out the figures for its enterprise-consumer mix in Blighty. It also hasn't provided Brits with anything affordable and new for almost 18 months. BlackBerry really needs to make a big splash to stop them defecting.

BlackBerry OS 10 represents a major usability change for loyal BlackBerry users. It also dropped its support for consumer BlackBerry Internet Service, which means punters have to buy a data plan from a mobile network operator (rather than pay BlackBerry) in order to access email and BBM over the air. But the Q5 does offer BBM Video Chat, modern web browsing and a decent camera - and represents some continuity.

Pricing is not yet known, but availability will be apparently be in the summer - just in time for another round of riots. ®

The hard-working founder of the leading BlackBerry fan site is called Kevin. Many BlackBerry owners are teenagers. The juxtaposition of these two facts causes deep and immense satisfaction for this hack and, I submit, anyone aware of Harry Enfield's Kevin the stroppy teenager.

And rather than allowing the Q10 and Z10 to be described as "old and miserable", BlackBerry staff today stressed the phones are actually "hyper-connected, ambitious multi-taskers". So there you go.