So: the person alleged to have described himself as the “leader” of LulzSec was arrested for what, exactly?

There's been a lot of noise flowing around, and the odd tip-off (including some to The Register in an extensive phone call on April 29). Since we try to avoid jumping ahead of the court process, we have kept our traps shut.

However, with one Matthew Flannery having appeared in the Central Local Court in Sydney today, it is now on the public record that the charges he's facing are for defacing the Website of the Narrabri Shire Council.

Without wanting to downplay the seriousness of the trouble “Aush0k”, as Flannery is alleged to have called himself online, is in – if convicted of the attack he could spend is 12 years in the slammer – news of the target means there's plenty that doesn't ring true about this case.

Here is your elite hacker, world: someone of whom the Australian Federal Police originally said:

“Police will allege the man was in a position of trust within the company, with access to sensitive information from clients including government agencies.

“The AFP believes the man’s knowledge and skills presented a significant risk to the clients of the company for which he was employed had he continued his illegal online activities.”

It's very difficult to reconcile “leader of LulzSec”, “significant risk”, “knowledge and skill” with “defacer of Narrabri Shire Council”.

I would be the last to make fun of Narrabri – it is, after all, home to the Australia Telescope Compact Array. However, with a total population of 14,000 and low Internet penetration (by national standards), it's quite possible that narrabri.nsw.gov.au would have days on which most of its traffic comes from search engines' crawlers. 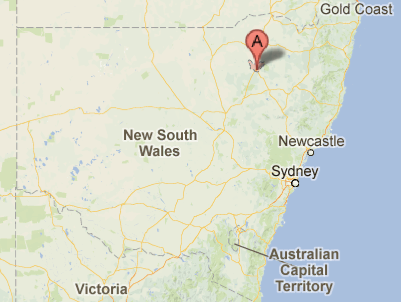 Narrabri, target of the l33t

Defacing Narrabri Shire Council is hardly a bragging-rights attack. Australia's democracy failed to teeter on the edge of collapse when it happened; in fact, Australia failed to notice it happening. Whatever the attack entailed, it had even less impact that when Anonymous dumped the Mosman Shire Council site to Pastebin in 2011.

So the Australian Federal Police's huge bragging-rights coup, the arrest of the “alleged leader of LulzSec”, was to catch someone defacing a ColdFusion/Dreamweaver site on a Windows server at GoDaddy in Singapore.

It's almost enough to make me believe in the theory that Flannery was set up: because you'd have to be an American script kid to think that this target was worth your effort.

The case returns to court on August 6. ®