The Financial Times website and its Twitter accounts were this afternoon hijacked by pro-government hackers from the "Syrian Electronic Army".

The blog has been cleaned up, but the Twitter accounts remain compromised. 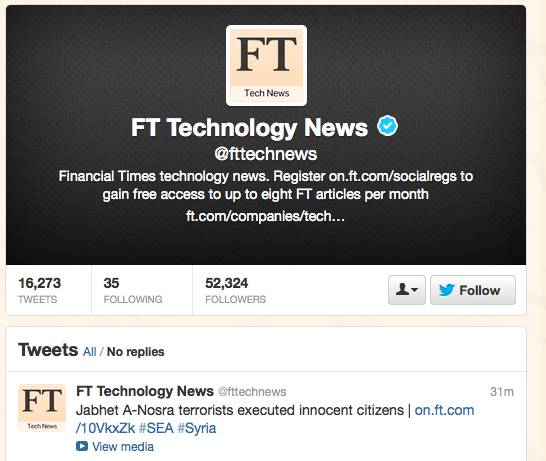 The takeover is the latest in a series of high-profile attacks against media organisations by hackers apparently in favour of Syrian president Bashar al-Assad. The so-called electronic army has knackered the online operations of the The Guardian, Associated Press, the BBC and even satirical newspaper The Onion.

Techies at The Onion published an informative postmortem after the attack, revealing its email accounts were infiltrated following a multistage phishing expedition - a raid that gave the hackers control of the magazine's social networking pages. The techniques used against the FT are unclear at the time of writing.

Computer security biz Arbor Networks said Twitter's anticipated introduction of two-factor authentication ought to curtail, if not eliminate, this sort of account hijacking. Dan Holden, director of research at Arbor, commented: "Twitter recently announced plans to introduce two factor authentication, which is a big step forward from a security perspective. As this particular event shows the human element is often the weakest link in any security solution."

"Given similar attacks in recent weeks against the Guardian in the UK and The Onion in US these attacks seem to be very targeted. Organisations should put processes in place to ensure that their staff are trained on best practices and have the support and training needed to allow them to follow these practices easily during their normal working routine. Ideally network monitoring solutions should also be put in place to alert an organisation when a user system connects to a known bad actor on the internet as this may indicate a compromise, allowing remedial action to be taken before there is any business impact," he added. ®

Local carriers are also upset with the laws, which they say will break encryption
Legal6 Jul 2022 | 3