Of those who have an opinion, over 97% say we're to blame

A major study of nearly 12,000 peer-reviewed papers in the climate-science literature has – again – proven that among climate scientists, an overwhelming percentage agree with the consensus view that human activity causes global warming.

The study was led by John Cook, a post-doctoral fellow in the Global Change Institute at the University of Queensland, Australia, coauthor of Climate Change Denial: Heads in the Sand, and lead author of a paper discussing the findings of the study in question and published in Environmental Research Letters entitled "Quantifying the consensus on anthropogenic global warming in the scientific literature".

As the title of Cook's book implies, he adheres to the consensus view that anthopogenic global warming (AGW) is a fact. He also maintains the website Skeptical Science, which describes its goal as being "to explain what peer reviewed science has to say about global warming."

Cook is not a climate scientist – he's a physicist. As such, however, he has a respect for conducting his survey in an objective manner as possible, as evidenced in the methodology he and his all-volunteer team used to conduct it: 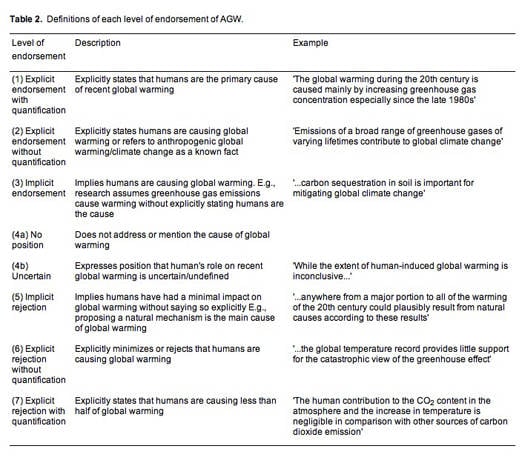 The results of the survey were also analyzed in terms of the age of the papers over the 21-year period of the study; Cook and his team discovered that there was a marginal increase in the amount of endorsement of AGW over those years, reaching 98 per cent in 2011.

"Our analysis indicates that the number of papers rejecting the consensus on AGW is a vanishingly small proportion of the published research," Cook says in a video abstract of his team's paper.

Cook also points out that "These results were strikingly consistent with previous surveys," citing the 97 per cent consensus determined by a 2009 study by Peter Doran and Maggie Kendall Zimmerman, and the 97.5 per cent consensus found in a 2010 survey by William Anderegg et al.

"There is a significant gap in public perception of the actual 97 per cent consensus," he says. "When a US representative sample was asked 'How many scientists agree that humans are causing global warming?' the average answer was around 50 per cent. This misconception has real-world consequences."

Climate skeptics may question the objectivity of Cook's team, but that argument is weakened by the close correlation between their ratings and those of the scientists who wrote many of the rated papers.

More-cynical skeptics may also argue that the scientists involved are merely perpetuating the "myth" of AGW because they are in an echo chamber of group reinforcement or are anxious to keep their grant money flowing.

Perhaps. But the likelihood that over 97 per cent of climate scientists who have expressed an opinion on AGW are either that self-deluded or that venal is as "vanishingly small" as the number of peer-reviewed papers that explicitly or implicitly deny the consensus among climate scientists that we humans are major contributors to global warming. ®