A group of scientists from the University of Nevada at Reno says tiny sensors – small enough to be suspended in an optical trap – could pave the way for a new kind of ultra-sensitive gravity wave sensor.

That is, of course, if gravity waves exist: predicted by Einstein's general theory of relativity, gravity waves have proven elusive. In spite of instruments so sensitive they're upset by vacuum noise, nobody has conclusively detected gravity waves so far.

To measure a gravity wave, physicists need to detect the minuscule space-time distortions that would occur when it passes. A typical approach is to try and measure an interference pattern at the intersection of two lasers, reflected from test mass mirrors a long way apart.

The Reno group says they're trying to overcome the problem of friction, since the local effect of a gravity wave may be smaller than the friction acting on the test masses. By suspending a tiny, laser-cooled tunable sensor in an optical cavity, they're also offering a much smaller gravity wave detector that could sense “signals” in the 50 kHz to 300 kHz range.

The group's paper, published at Arxiv and in Physical Review Letters, proposes trapping 150 nanometer silicon spheres in the optical cavity – a standing wave of light between two mirrors. This “frictionless” approach, the researchers hope, would be more sensitive than conventional approaches. 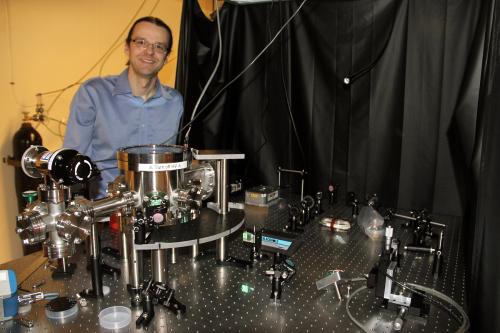