BT Tower is just a relic? Wrong: It relays 18,000hrs of telly daily

Reg goes inside and up Blighty's telecoms spire

Geek's Guide to Britain The Post Office Tower in London, adorned with microwave dishes and resembling a gigantic Star Trek gadget, symbolised the UK's white heat for technology in the 1960s.

The tower in 2009 before the dishes were removed
(Credit: David Castor)

In an era of transistor radios as a fashion accessory, the space race, and the arrival of Doctor Who, this alien cylinder of glass and metal stood proud.

It was also designed to operate through the white heat of a nuclear apocalypse. It’s got a war room underneath, but the shutters on that underground bunker were brought down after a half-arsed bomb attack on the revolving restaurant at the top of the tower in 1971.

The explosion was attributed to the Provisional IRA, but it was actually conceived and carried out by an otherwise barely coherent bunch of anarchists. The structure was closed to the general public a decade later.

(In most people’s minds, however, the building's most terrifying enemy was a gigantic fluffy white pussy that struck in 1972.)

Moving on to the present day, the tower is arguably still the most important communications nerve centre in the UK, but this has little to do with its original purpose.

It started life as The Post Office Tower: a radio mast designed as a hub for a national microwave network that was seen as the future of telecoms.

It was officially opened in 1965, four years after construction started. According to a wonderful 1970 brochure BT gave us, the spire - later renamed the BT Tower - was expected to provide four microwave paths, carrying “150,000 simultaneous telephone conversations or 100 both-way television channels”.

This could be increased with the addition of more aerials - if such a preposterous amount of communications capacity was ever needed.

Just a big antenna with a bar on top

So when Eric Bedford and G. R. Yeats of the Ministry of Public Building and Works began designing the building, the requirements were, well, just make something very tall. OK, specifically, something so tall we can hang radio masts and dishes on it to give 360-degree coverage - and it must sway no more than 10 inches even in the face of 95mph winds.

So, that’ll be a tall tower that is round and slim.

The tower itself is 177m (581ft) high, plus a 12m nest of antennas at the top. Rising up from the crucially important Museum Exchange just north of Oxford Street, this was more than enough to peer over the Chilterns to the North of Blighty.

It was the tallest thing in London until the 183m Tower 42 (the NatWest tower to the rest of us) opened in 1980. The telecoms tower is currently the 10th highest structure in the capital, although the Greater London Authority's incontinent planning policy will push it further down the list over the coming years.

However, while many of us might find the likes of Canary Wharf and the Shard oppressive, the Post Office Tower quickly wormed its way into our affections. I think this is in part because it was never a high citadel of plutocrats looking down on us while shuffling tax-free money around the world. It doesn’t glower or aggressively shoulder its way onto the skyline with all the other well-lit concrete and glass.

It’s just there, slenderly popping up whenever you turn a corner in the West End, or crest the top of the North Downs. And it was, after all, the Post Office Tower, in its own way a community communications resource that “we” nominally owned, had brief access to, and had certainly paid for.

The best way to appreciate how slim the tower is, is to get underneath. Not just on the street, but right underneath all 13,000 tonnes of it. So that’s what we did a couple of weeks ago, taking a tour under and through the tower courtesy of BT.

Stepping inside the tower: A pyramid, a raft, and a war room

The public areas of the tower have had a number of facelifts over the years - partly in response to security concerns, partly to reflect the transition from GPO to British Telecommunications to BT, as the UK incumbent telco was spun out of state control.

Down in the bowels, things are reassuringly unchanged. To get there, we walked through a room of System X kit, dropped down to the “sub-basement”, before crossing a corridor with a mysterious water tank, and old filing cabinets spanning multiple decades. We then had to shimmy up a ladder to get into the chamber under the shaft itself.

The core concrete shaft is just 10.5m in diameter, and 0.61m thick at its widest point. It slims down to just 6.05m in diameter, with walls just 0.3m (a foot) thick. The tower’s core rests on a 6.5m-high concrete pyramid, which itself rests on a 27.5m square, 0.9m-thick concrete raft. The pyramid, according to that wonderful 1970 vintage brochure BT gave us, actually protrudes one foot above ground level.

Some say the raft floats on a “bed of oil”, but we’ve not been able to get that confirmed. BT’s bumf simply refers to the foundations being dug into London’s distinct “blue clay” - which at least matches the telco’s corporate colour scheme.

To describe this construction as small is, obviously, overstating it, but to get an idea of just how compact the shaft is, consider the size of the light fittings or the Henry vacuum cleaner in our photos, or simply the curve of the base of the tower.

And at the base, there’s some ancient graffiti and some cleaning equipment. In the gully around the bottom of the pyramid there’s some water that’s seeped in, along with an ancient tin bucket - just in case. This scene could be from any time in the last 50 years, with only the odd pair of discarded trainers and the grinning Henry giving much in the way of time cues. 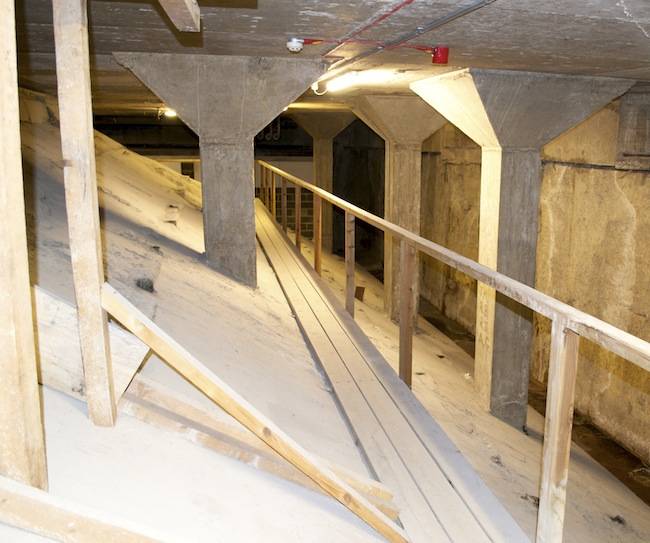 The pyramid is concrete ... the wood is to stop journalists falling over (All inside photos by Joe Fay) 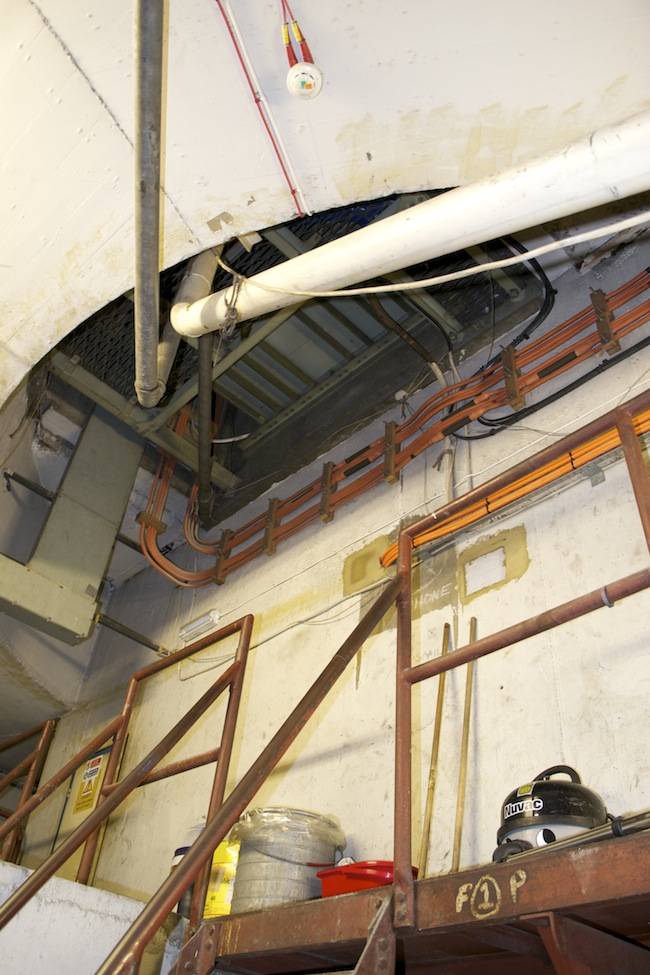 Those wooden struts aren’t actually holding up the tower, you’ll be reassured to know, but access covers just below ground level.

“We haven’t seen any rats, but we think we’ve seen the footprints in the dust on the cables,” said our guide, facilities engineer Mark Polley. “So wash your hands when you head up to the restaurant.”

There are other, mysterious chambers under the pyramid. Somewhere down there is the “war room”, apparently complete with bunk beds and chemical toilets. No mention of tinned foods. Perhaps that would have been sent down from the Billy Butlin-operated restaurant at the top.

Polley reckoned “war room” was a slightly euphemistic title. The tower was designed to withstand a nuclear blast a mile away, but in the event of hostilities breaking out, it’s difficult to believe that London would have been subject to just one blast, or that the incoming missile would’ve been that accurate. More likely, in his opinion, it was to deal with civil disorder - the original specification included a central locking system that the front desk guards would have hit in the event of the building coming under attack. “Strikes,” as Polley put it.

Somewhere down there are four ship engines as well, which can power the tower in the event of a power cut - again, just in case of strikes. That machinery was also off limits the day we visited. 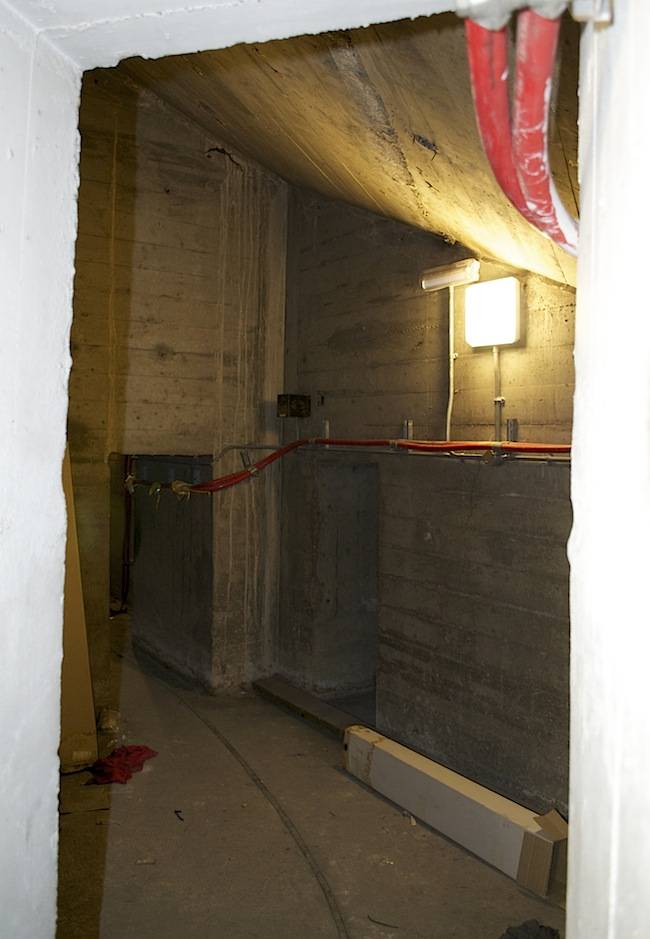 The tower itself is only 20m in diameter at its widest, and the much more slender core carries the two lifts and ducts for power, telecoms and other utilities. The original lifts were the fastest in Europe, whizzing diners and engineers to the top at a cracking 1,200-feet-a-minute. Sadly, they were decommissioned some time ago. Happily the new lifts are a nifty 1,400-feet-per-minute, getting you from the underground level to the top in under 30 seconds, or put another way, just long enough to get your camera out and get a snap of the digital counter whizzing around.

Dave Lemm, our lift operator, has been on the job for 25 years, which was the longest anyone we met there had been at the tower, but not by much. For such a narrow building, people don’t seem to want to leave.

That blue sheeting in the pics is because the lifts were being used to shift gear up to the restaurant for an event the day we visited. Operating BT Tower’s lifts is just as glamorous a job as it was back in the 1960s. While the public hasn’t been able to visit since the turn of the 1980s, BT hosts 600 events a year at the tower, many of them linked to its charity operations. In fact, El Reg has paid a visit once before, to a BT-Football Association event that included luminaries such as ex-Arsenal player Martin Keown and that bloke who played EastEnders hard man Phil Mitchell. 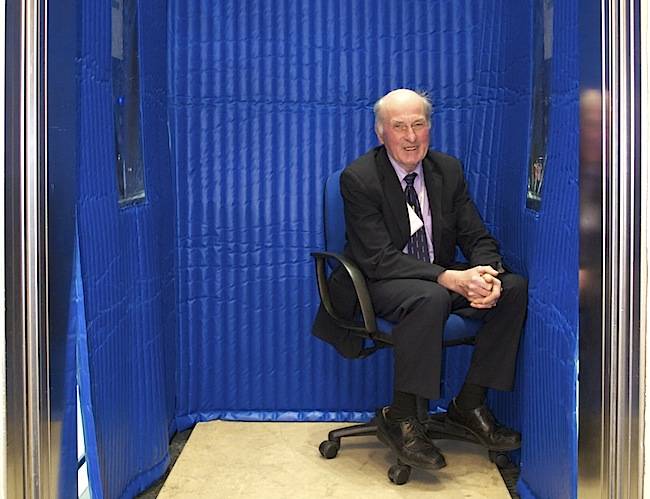 Dave Lemm … operator of one of the UK's fastest lifts 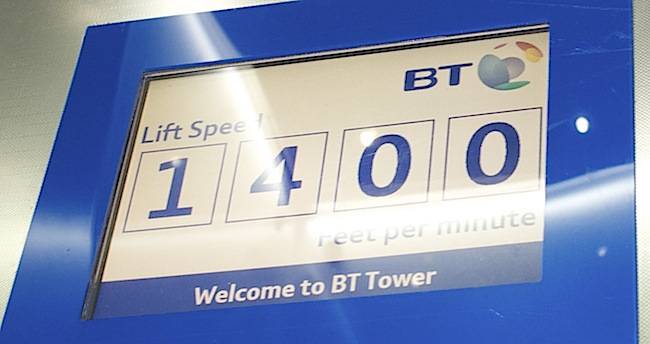 And take-off! How BT execs race to the top

This time we had it to ourselves, bar our guides and catering staff getting ready for that evening’s event. Remember we said the restaurant floor was 20m in diameter? If this sounds cosy, consider that includes the core of the building. The actual rotating floor width is 3.35m. If you were having a Martini up here back in the day, you really were in exclusive company. The 1970 brochure said you could balance a penny on the floor as it revolved, three times an hour, and it would not topple (the coin, not the tower). It really is that smooth in our experience. Not a soap star nor a footballer showed the slightest wobble on our previous visit. There is an emergency stop button and we took a picture: 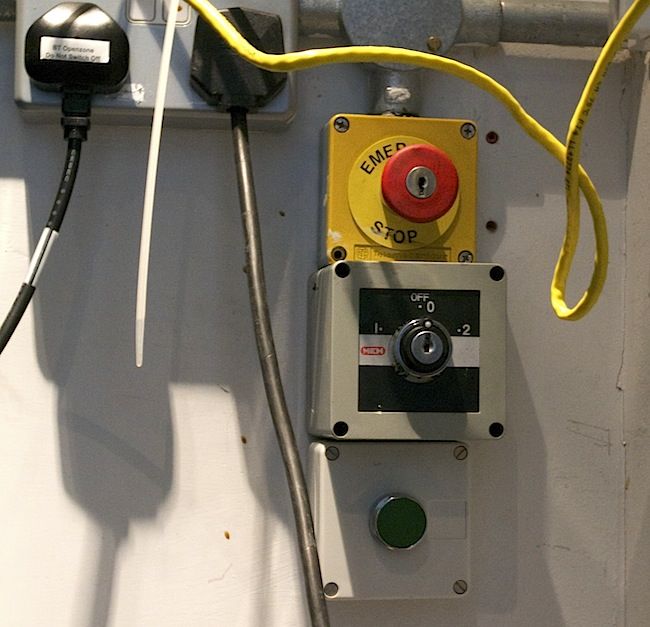 Stop the world … this Reg hack is not for turning

An aside, we’d never really considered how the windows were cleaned. Growing up in 1970s London, one was accustomed to grime (again, thank the strikes). Happily tower manager Karen Ahern - 19 years at the steel spire - explained the system to us. There's two poles outside the window, a one-man basket is lowered down, someone hits a button, the restaurant rotates, and the window cleaner in the bucket gets busy with his squeegee. 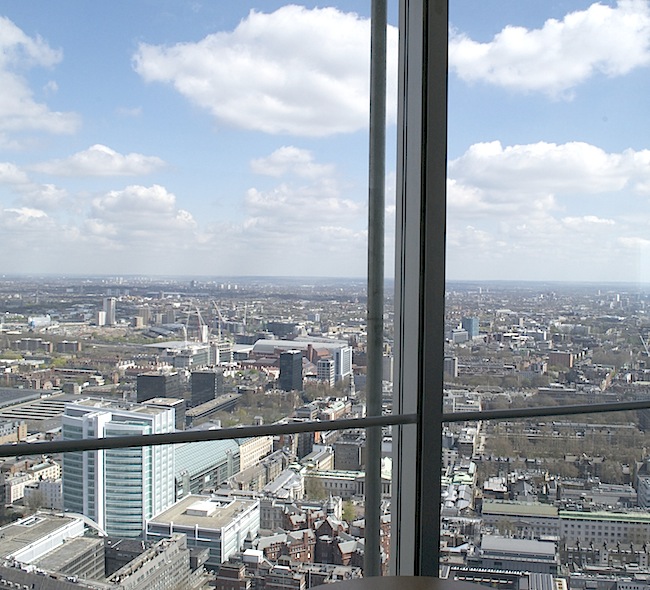 Don't look down … The dizzying heights of window cleaning