Auto-builders get a home in the great outdoors

Industrial robots from Germany will be spending their life in Australia's great outdoors, helping to improve the accuracy of the country's Global Navigation Satellite System positioning knowledge. The project, a GNSS robotic calibration facility, has been switched on in Canberra, and will ultimately be part of a nationwide calibration network.

The robots are designed to track passing positioning satellites and scan the antennas, collecting information about slight deviations in the position of the antenna as satellite signals enter it from various points (referred to as bias).

This, however, is a problem for agencies like Geosciences Australia, which want to get sub-millimetre measurements of the deformation of the Earth's crust due to plate tectonics.

“The distance to the satellites is 20,000 kilometres, and we're attempting to model the range at the millimetre level, so very small biases in the ranges can substantially map onto the coordinates,” Dr Dawson said.

With biases of up to a centimetre in the antenna, he said, and for some activities – such as learning to measure earthquake hazard – it's important that the data is available sooner rather than later.

“We know where the tool point is of the robot, to within 0.1 mm per year. Now, the intent is to characterise the behaviour of the antenna as signals enter it from various parts of the sky.” 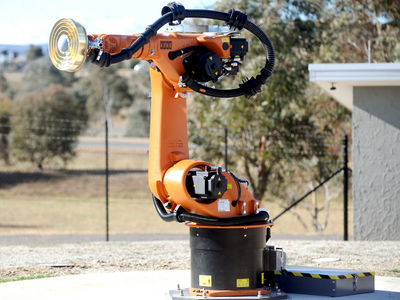 The signals also have to be corrected for geophysical phenomena such as Earth tides (the crust moving as much as 30 cm with the orbit of the moon), the loading effect of the oceans, which weigh down the crust as they move, and the impacts of the atmosphere on the satellite signals.

Over time, he said, better modelling of these errors – and better consumer equipment – will almost certainly lead to centimetre-level accuracy even of consumer GPS, especially as new systems (including China's positioning efforts and Europe's Galileo) come online, providing more signals.

“Though improvements in communication and analysis strategies, we should be able to rapidly compute a correction product, that could be fed into the handheld units,” Dawson told The Register. ®