Ultra-fast US academic network Internet2 is going to peer with Microsoft's cloud to give researchers from over 200 institutions high-speed reliable access to Azure at a discounted rate.

The peering arrangement with Microsoft was announced on Thursday and will initially see Internet2's 220 plus member institutions gain "enhanced access" to Windows Azure and Microsoft Office 365 Education. This will be achieved by Internet2's private 10Gbps and 100Gbps network peering with Microsoft data centers likely located in the middle of the country where the bit barns are big and electricity is cheap.

"We've got a lot of universities that use these services," Khalil Yazdi, Internet2's CIO told The Register. "The intention behind our offering the services through Internet2 NET+ is to leverage the community's assets and in particular the network to ensure we have unimpeded and non-redundant access to the services".

The use of Azure is something of a coup for Microsoft, as it will make its cloud infrastructure preferential to researchers for both connectivity and cost reasons, which we reckon explains why the company has been willing to take a revenue cut by waiving data egress prices.

Internet2 representatives started talking with Microsoft a year ago about peering with its data centers, but they had some conditions – namely that data egress costs are waived, federated identity access management be put in place, and that through a variety of accountancy tricks the rolling operational expenditure for Azure services can be treated by researchers as a capital item to help them when filling out finicky grant reports, Yazdi said. Microsoft fulfilled these obligations.

"Microsoft just happens to be one of the first out of the gate to have demonstrated a willingness to do that. I'm comfortable that over time we will get others to do the same," he explained.

The consortium is also talking with Amazon Web Services, Dell, VMware and Rackspace about similar services, and hopes to have conversations with Google soon, we understand. Amazon is not known for bending to the demands of its customers, though the company does like to support researchers' use of cloud computing tools.

"We are in dialogue with Amazon and are talking about these issues," Yazdi says.

By peering with Microsoft directly Internet2 hopes to dramatically cut the number of hops it takes to get from academic networks to Azure. It also is confident the system will allow researchers to chuck large amounts of data into and out of Azure with reliable rates. 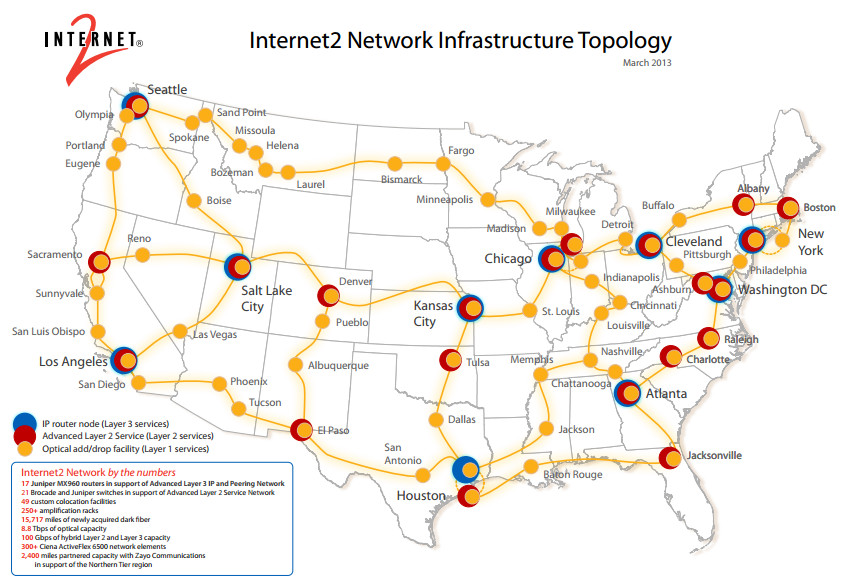 "Through Internet2 we can support a small number of very large flows, so really trying to get data in and out quickly, [we're] looking at trying to get as small a number of hops as we can."

Internet2 plans to peer at two of the router nodes in its network (see picture), but is also thinking of doing a direct 100Gbps connection with Microsoft.

"It's likely that that's how they're going to come in," Zekauskas says. "We can route them to the provider through that."

Internet2 has 8.8 Terabits of network capacity and is one of the largest production networks that use software-defined networking via OpenFlow. It is operationally similar to the UK's own Janet network and the European Union's mega-network GEANT though neither of these networks have yet inked agreements with cloud service providers. Microsoft announced a similar deal with Janet on Tuesday. ®