Slow and steady really does win the race

Backup software supplier Veeam is quietly doing extraordinary things; it's growing its backup business while touting their latest software as a means to continue growing its market share.

Veeam is privately-owned and focusses on virtual machine backup. It has no venture capital funding as far as we can tell. Despite that, it's quite open about its revenues and customer growth numbers. We've charted them to show their growth trajectory. 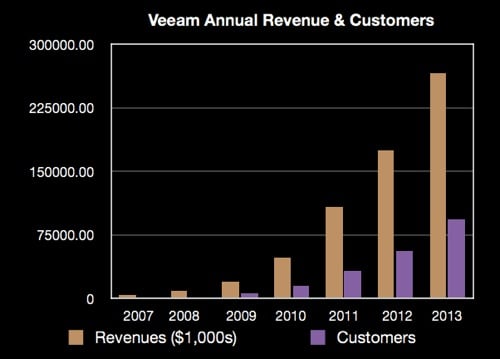 We charted revenue in thousands of dollars, instead of millions, so that we could stick customer numbers on the same chart and compare the two growth curves.

Big events in Veeam's history are:-

This has been a busy company, product development-wise. It reckoned it had 11 per cent of the VM backup market at the end of 2012, based on an assumption of 8 VMs per CPU socket and 35 million total VMs spread across VMware, Hyper-V, Citrix XenServer, Red Hat, Oracle and any other supplier.

Veeam thinks it will protect 7.3 million out of 40 million VMs by the end of this year; an 18 per cent market share. So … it is growing and taking market share from other VM backup suppliers.

Version 7 of its Backup and Replication product introduces WAN acceleration so that backup data sent to a remote site arrives quicker. It can make backups using storage snapshots, and can archive backup to the cloud.

The WAN acceleration involves deduplication technology developed by Veeam. Backing up from storage array snapshots lessens the use of the host server CPU cores that are running customers' VMs. It uses VMware changed block tracking, meaning there is instant VMware snapshot commit.

Veeam reckons it's up to 20 times faster than other backup approaches. Only HP arrays are supported at this point; StoreVirtual VSA, StoreVirtual, and StoreSer. Other non-specified suppliers will have support added in the future.

Veeam makes the point that treating snapshots in the SAN as backups is a risky proposition because if the SAN fails, the backups are not available; they're better stored off the SAN. Timashev said: "IT can back up three or four times every hour if they desire, ensuring that in the event that some or all of the production environment goes down, little, if any, data will be lost."

It says that with version 7, customers can "display vCloud Director infrastructure in Veeam and restore vApps and VM’s directly to vCD, monitor backups and backup infrastructure from vSphere, and archive … backups to tape."

Restoration is fast as well; "instantly from Microsoft SharePoint and Exchange, SAN Snapshots, VMware or Hyper-V disk based backups, and from the cloud."

The product comes in three editions; Standard, Enterprise and Enterprise Plus. Pricing is a bit complicated so we copied a Veeam slide to show it: 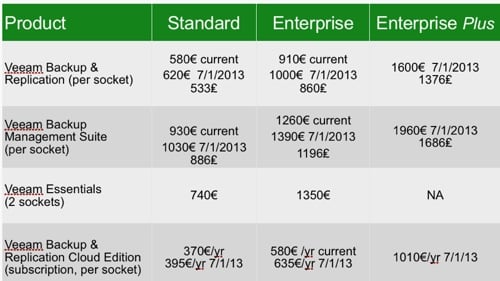 Enterprise Plus is a free and optional upgrade for existing Enterprise customers who should note that the annual maintenance cost is higher with the Plus product.

Veeam Backup & Replication v7 will be available in the third quarter of 2013.