Now it gets serious: Fracking could RUIN BEER

The extraction of oil and gas by means of hydraulic fracturing – aka "fracking" – has ignited a firestorm of controvery over its possible risks, but a new report hands a powerful weapon to its opponents: fracking may harm German beer.

The Telegraph reports that the German brewers' association Brauer-Bund has warned Chancellor Angela Merkel that fracking may foul the water used in German beer, and run afoul of the purity law, the Reinheitsgebot, which requires that German beer be composed of only malt, hops, yeast, and water. 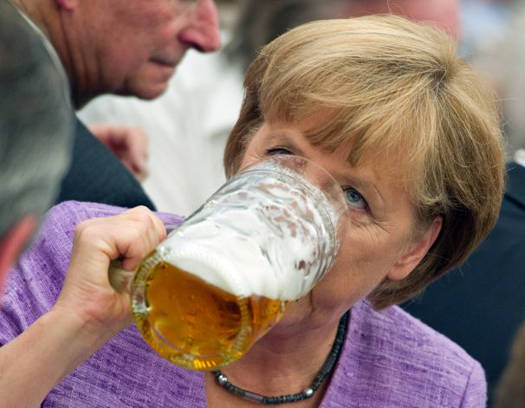 The German Chancellor in happier times

Since fracking has been reported to have introduced such contaminants as salt, chemicals, and methane into water supplies, the German Braumeister group is worried.

"The water has to be pure and more than half Germany's brewers have their own wells which are situated outside areas that could be protected under the government's current planned legislation on fracking," a Brauer-Bund spokesman told The Telegraph.

"You cannot be sure that the water won't be polluted by chemicals so we have urged the government to carry out more research before it goes ahead with a fracking law," he said.

This is serious business. After all, as the Brauer-Bund website notes – quite correctly, we may add – "Bier ist Deutschland".

Just last year, Statista reports, the top three German brewers – Oettinger, Krombacher, and Bitburger – produced over 15.6 million hectoliters (3.3 billion pints) of bier. And that's just the top three; if you count the total output of the top 10 brewers, that amount more than doubles, and if you add up the output of all German breweries – The Telegraph counts 1,300 – the flow is a veritable torrent of lagers, ales, and weißbier.

That's a flood of industrial clout that Merkel can not afford to ignore. Pity the poor Chancellor, caught between the extraction industry on one side and the brewmasters on the other.

It's enough to drive a woman to drink. ®