Grim outlook for Big Storage as revenues dip across board

Mainstream storage vendors seem to be in trouble as Dell, HP and IBM's storage revenues have tanked over the past two years. 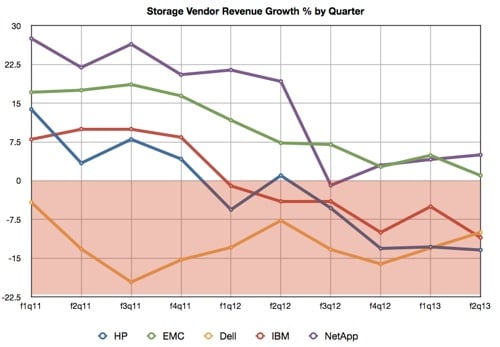 The reddish area marks out negative growth rates. So, HP and IBM have seen their storage revenues decline pretty consistently since their first fiscal 2012 quarter, while Dell's storage revenues have been in decline over the whole period.

EMC and NetApp's storage revenue growth rates have stayed positive, except for a blip by NetApp in its third fiscal 2012 quarter. It is now growing its storage revenues slightly faster than EMC.

Dell's storage tanked deeper and faster that that of IBM and HP. While its trend is flattening out, can it sustain the lessening of its decline?

From the revenue growth point of view, storage arrays are pretty straightforward. The real growth magic comes from startups like Actifio, Nimble Storage, Nutanix, Tegile, Tintri and Veeam, and perhaps from those punting all-flash arrays like Pure Storage, Violin Memory and WhipTail.

What are the mainstream system vendors going to do to rescue their businesses? ®