Microsoft's new Office 365 Home Premium subscription version has proven so popular with customers that it has reached one million subscribers faster than many popular online services have, the company has claimed.

According to somewhat vague sales figures announced on Wednesday, it took the Home Premium edition of Office 365 – launched in January of this year – just around three and a half months to sign up a million customers.

It's not too surprising that the Home Premium edition of Office 365 should do well, given that it's clearly the version that offers the sweetest deal for customers. Home Premium subscribers can install the full Office suite on up to five devices and each device can belong to a different family member, provided they all live under the same roof – all for just $100 per year.

By comparison, although the other versions of Office 365 also allow customers to install the desktop applications on up to five devices, the annual fees are more expensive and all five devices must belong to the same user. 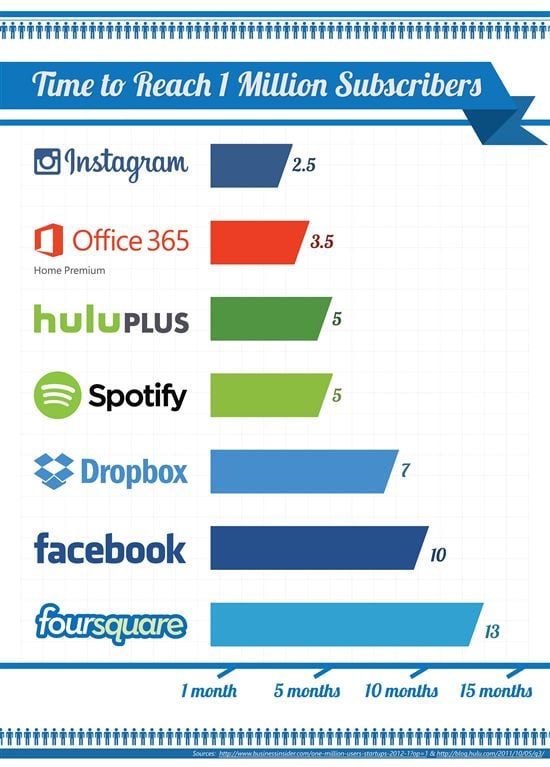 Microsoft has yet to release any subscription figures for its more business-oriented formulations of the Office 365 suite, but to be fair, it did launch more than a month later than the Home Premium version.

In addition to crowing about its subscription figures, Microsoft said "the new Office" is "the best-selling Office edition yet," having moved an average of more than one license per second since its January launch.

By "best-selling," Microsoft really means fastest-selling. And by "the new Office," it means not just the subscription Office 365 versions of the suite, but also the perpetually licensed Office 2013 versions, including the Home & Student, Home & Business, Standard, and Professional editions. Sales to individuals and organizations were both tallied.

It's hard to judge just how many of those Office licenses represent actual copies of the software running on customers' computers, though. Just as many of Microsoft's claimed Windows 8 sales are believed to be volume sales to hardware makers, Microsoft also sells Office through OEMs as well as to consumers, and it doesn't break down its sales figures to show exactly who's buying what.

According to reports in March, Microsoft has been offering Office licenses to OEMs that agree to build Windows 8 tablets at deeply discounted rates – or possibly even for free – so it's wisest to take Redmond's sales claims with a pinch of salt, insofar as what the actual Office installed base looks like. ®