The Chinese Defense Ministry has rebutted claims in a US government report that it is systematically stealing American military secrets, and points out that China is producing enough of its own.

China does have an aircraft carrier, which was launched as the Soviet Navy's Riga in 1988, left derelict, and then sold to the Chinese and renamed the Liaoning. It's half the size of the US Nimitz-class aircraft carriers – of which the Navy has 10 – but Chinese shipyards are reportedly working on their own designs.

As for stocking the ship, the Chinese F-15 multi-role aircraft is in testing for carrier landings, and there have been some interesting sightings of Middle Kingdom airframes with stealth capability. El Reg has some doubts about any immediate threat, but the Chinese are making heavy investments in aerospace technology. 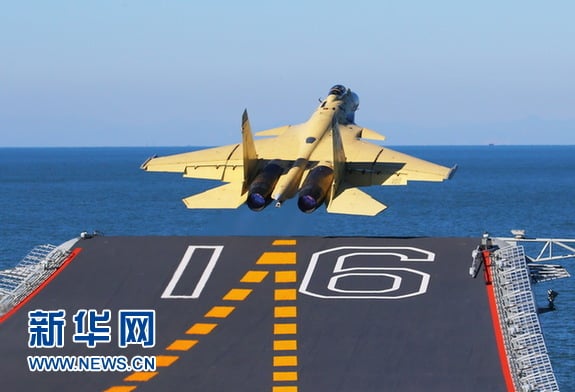 The punch in a pocket carrier

On the matter of satellite navigation, however, China is approaching a point where it won't need to rely on the GPS system for much longer. Its home-grown sat-nav system Beidou (BDS) has 16 birds aloft, covering the Asia-Pacific region, and the government has mandated its use by civilians. It plans to go global by 2020.

The US hacking claims that inspired the Chinese comments came from a redacted section of a Pentagon report (PDF) that identified the systematic plundering of US military intelligence by state-sponsored Chinese hackers.

The report, prepared by the Defense Science Board, claims theft of classified data on the F-35 Joint Strike Fighter, F/A-18 fighter, and V-22 Osprey tilting-rotor aircraft, as well as Black Hawk attack helicopter design plans. Specifications for the Patriot missile system and Aegis and Terminal High Altitude Area Defense anti-missile systems are also thought to have been compromised.

The Defense Science Board report was first published in public form in January, and concluded that "the United States cannot be confident that our critical Information Technology (IT) systems will work under attack from a sophisticated and well-resourced opponent utilizing cyber capabilities in combination with all of their military intelligence capabilities."

The report recommends that the US should obtain "deeper intelligence about adversaries' offensive software," safeguard US nuclear forces so that they are less vulnerable, and set up a "Cyber Warrior" program within the Department of Defense to recruit and train the online security teams.

This will all be interesting grist for the mill when President Obama has his first meeting with the new Chinese president Xi Jinping next month. Many topics will no doubt be on the agenda, but based on the current row, online tactics will be high on the list. ®