Eugene Kaspersky thinks Huawei's products contain “some doors, they are not back doors, but somewhere in-between”, but that overall “there is nothing really wrong with Huawei”. The Russian security supremo is nonetheless taking steps to ensure his company doesn't experience the same less-than-welcoming reception Huawei has found in the US market.

Kaspersky offered his opinion to Vulture South yesterday. Kaspersky breezes into Australia most years and behaves an awful lot like a Russian Richard Branson, putting on a stunt of some sort for the press*, revealing extra-curricular adventures (a trip to Antarctica with horrifying instagram-over-satphone charges) and offering plenty of knowing winks that hint at his history of association with Russia's security apparatus and unusual proximity to the digital underground.

Throw in the big hair and he puts on quite a show, making him a source of quotable quotes (he's adopted the term “SCADAgeddon” coined by local provocateur Stilgherrian to describe a likely outcome of online warfare) but also not quite ever appearing entirely serious.

How much weight to place then, on Kaspersky's claims of grey areas in Huawei products?

“We are not going to detect Huawei software as malicious,” he said. “And it is not just Huawei that has this grey area in their products. There was a very famous story about Sony rootkits,” he pointed out, before adding that he feels Huawei's troubles in the USA and beyond can be attributed to the detection of some suspicious behaviour in its products and the knowledge of those issues being politicised.

Kaspersky didn't want to talk politics, but did say his company is alive to the fact it can hurt his its prospects.

“In the USA, Australia and Western Europe we are facing similar issues of trust,” he said, and outlined plans to address those issues before they fester.

“We are entering the United States and we are about to have second backup and compiling systems in the States,” he said. “US citizens will have access to source code and we will be very open to disclose the source code in case of requests.” 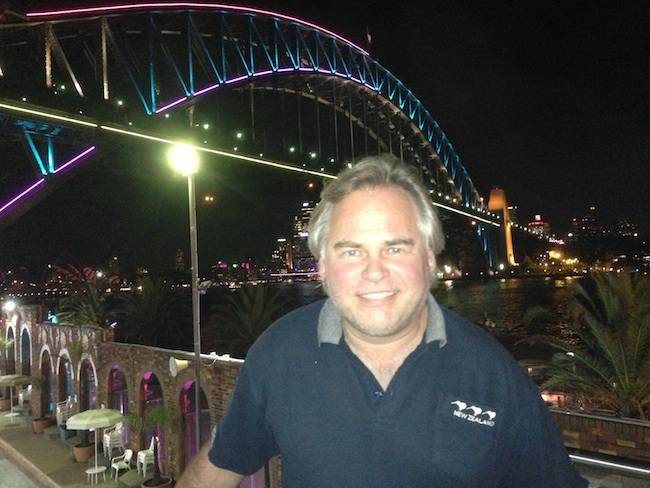 Eugene Kaspersky, some moderately-famous bridge and an inconvenient light

“We need to prove that we are from the other side of the world, but you can trust us, and we will do our best to confirm it and to prove it. If we have any questions like Huawei questions about our technology, we will explain it to you, we will prove there is nothing wrong in our products and technologies.”

His tone while detailing those plans? Deadly serious and delivered with all the weight of a CEO with his eye on growth. But also, as seems always to be the case with Kaspersky, also with an eye on the next party. ®

*2012 saw Kaskpersky invite media to play paintball. At the end of the session he declared “I kill so many journalist today”. Given the fate of some members of the profession in his home nation, it was hard to know just what he meant by the remark. This year access to the man was offered in a waterside restaurant with stunning views of Sydney Harbour Bridge.