Can't shield against cosmic rays, can't get there faster

NASA has released the results of radiation measurements taken during the Mars rover Curiosity's trip to the Red Planet, and the data show doses received during a such a trip would exceed the space agency's current career limit for astronauts.

"Using the words like 'showstopper' or not, it's difficult to say that," NASA spaceflight radiation health officer Eddie Semones told a reporter who asked if the data would result in that mission-ending decision. "I can say that given this data and our models that confirm it, we currently would exceed our acceptable limits of 3 per cent excess fatal cancer."

That "excess" risk is 3 per cent added to the average fatal-cancer risk, which – depending on a whole host of factors – is around 20 to 25 per cent.

Semones was speaking during a teleconference on Thursday announcing the findings obtained from Curiosity's Radiation Assessment Detector (RAD), which measured radiation during its trip to Mars. The radiation that RAD measured came both from the relatively low-level, steady bath of energetic galactic cosmic rays from outside our solar system, and from periodic bursts of intense solar radiation from our Sun's as-yet-unpredictable coronal mass ejections.

There are essentially two ways to limit an astronaut's exposure to radiation levels that exceed NASA's guidelines: reduce the time spent in interplanetary space by speeding up the trip, or improve the shielding protecting the astronauts in their craft.

There's also a third way, of course: change the guidelines.

As far as speeding up the trip to Mars, NASA's deputy director of advanced exploration systems Chris Moore said that work is underway on improved propulsion systems beyond today's rocketry, but they're unlikely to be ready in time for NASA's planned mid-2030s Mars mission. 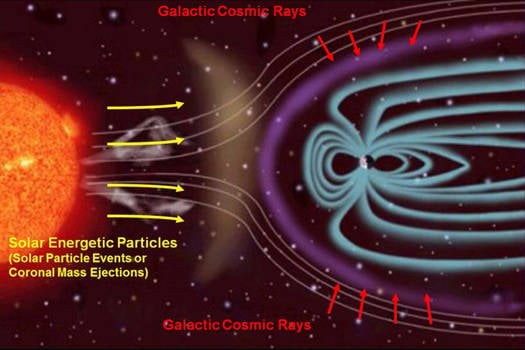 "We're working with the US Department of Energy now to look at various types of fuel elements for these rockets," Moore said, "but it's a long range technology-development activity, and it will probably be many years before that is ready."

Since a high-speed jaunt to Mars is not in the cards for the foreseeable future, Moore is focusing on shielding. "We know that hydrogen is a very effective shielding material – it attenuates the energy of radiation particles," he said. "So one way we can protect the crew is to surround them with water in the walls of the habitat."

Moore also said that the astronauts' food could be arranged so that it lines the walls of the spacecraft. "Food contains a lot of water and hydrogen," he said.

In addition to food and water, the Mars travelers could also be protected in the same way as are astronauts who inhabit the International Space Station: polyethylene radiation shielding. Being a long-chain hydrocarbon, polyethylene contains a lot of that radiation-attenuating hydrogen.

Semones, however, said that although current methods of shielding could be effective against solar particles – including protective suits that could be donned during particularly nasty solar storms – energetic galactic cosmic rays would require shields to be several meters thick to provide effective protection. And that's not going to happen. 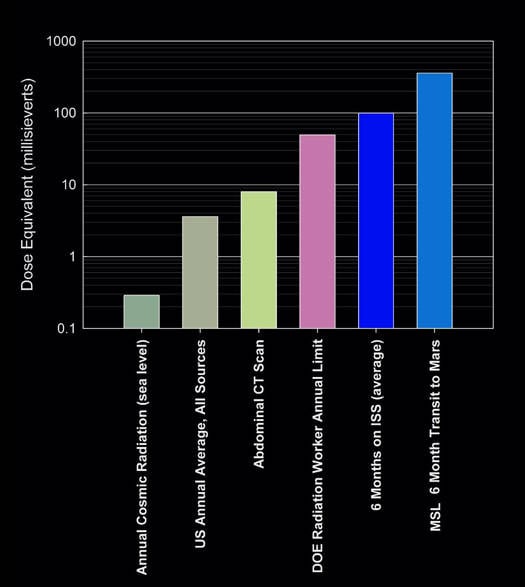 Radiation exposure from a variety of source (note the logarithmic scale)

Odds are that by the mid-2030s rocketry will not have advanced sufficiently to greatly reduce the amount of time it takes to get to Mars – which, when taking the shortest route, is about 180 days – so the only variable left is that 3 per cent "excess fatal cancer" guideline.

So that guideline is being reevaluated. "We're looking at that 3 per cent standard today," Semones said.

"Those kinds of questions are actually being addressed by the Institute of Medicine now," he said in response to a later question on radiation guidelines. "The idea, 'Is this a national imperative?', and how you ethically exceed current acceptable standards. So that's work going forward at a much higher level than the science objectives of this particular mission."

NASA's knowledge of the effects of radiation and possible mitigation strategies, Semones said, will certainly improve before the mid-2030s, but there's also the future beyond that to keep in mind.

"If we go forward and we're going to do longer-duration missions that would cause crews' risk to be higher," he said, "the ethics involved in allowing that to happen and the mitigations we would take to protect the crew is going to evolve before we make those decisions." ®