808 state: The Nokia smartphone that REFUSES TO DIE

Modern Symbian: It's not iOS, it's Android, but it was an embarrassment

Symbian devices dominated the first era of smartphones, but by 2011 it had become an embarrassment. The iPhone and Android operating systems appear to have been designed as mobile touchscreen computers first with phone functionality added on – the emphasis was on ease of use, a fluid graphics-intensive touch-friendly user interface, and web browsing.

Symbian’s traditional fortes, such as low power consumption, were no longer important – the market now demanded performance, features and ease-of-use over long battery life. Even before the arrival of CEO Stephen Elop, Nokia had realised this shift, and anointed its homegrown Linux (Maemo, then Meego) as its modern successor. But that project couldn’t deliver in time.

Elop made a rapid conversion to Windows Phone, which left Symbian withering on the vine and withering far more rapidly than Nokia anticipated. Rather than selling 150 million units over a two-year period from February 2011 as Nokia had hoped, Symbian-mobe sales fell off a cliff.

In 2011 Nokia disowned itself of both the Symbian brand (it became “Nokia Anna” and the subsequent update “Nokia Belle”) and the labourforce: some 3,000 Symbian developers at Nokia were transferred to Accenture. The following February, it torched everything on the roadmap except the 808 PureView. Most Accenture-bound developers were let go or reassigned.

Nokia had actually planned for a touchscreen tablet future in the late 1990s – and by 2001 had a very rich and flexible interface and stack of applications - but it failed to turn the work into reality. (See our special report Nokia’s Great Lost Platform for that story in depth.)

By 2006 all Nokia had left were variations, evolutions if you like, of work inspired by the 1990s-era, one-handed Navikey interface. Symbian gained a menu-driven interface that used two soft (on-screen) buttons, a non-radical design that avoided alarming Nokia customers. The Finnish company's smartphones were pretending to be dumb phones. Then the Apple iPhone came along, and what Nokia needed was a radical new-look system. It struggled to make Symbian even half-way decent.

The Anna and Belle updates finally gave Symbian a modern makeover. Belle in particular gave the OS a user experience much more similar to Android, and finally released the interface from its crippling legacy design. How does it work in practice?

Belle features an on-screen back key, inspired by Android, that takes you back to the home screen; popup menus in the user interface were finally banished in almost all situations.

The 808 PureView was released with a special variant of Belle, and late last year a formidable bunch of changes including, incredibly for 2012, Symbian’s first multitouch on-screen keyboard. These updates are now available for all Symbian^3 devices, including the N8. But the stream of updates hasn’t ceased: camera tweaks, Skydrive support, uploading to Facebook and Flickr, and Nokia Music support have all been added in the past few weeks.

So what do all these updates mean in practice? It’s not all plain sailing, but it’s much better to use.

Many of the old complaints against Symbian, such as its reliance on an archaic menu-driven interface, are no longer valid. The Belle update, when it finally and belatedly emerged last year, removed many of these flaws. The 808 was equipped with a decent 1.3GHz ARM11 processor core, Broadcom BCM2763 graphics processor and memory – rather than the constrained resources and cheap CPUs that were depressing features of many late-period Symbian devices.

The basics of communicating, and general housekeeping, are now handled very slickly. The way in which users can make voice calls and send texts is as good or better than any of the more modern rival phone interfaces - although previewing an SMS requires a third-party app.

One single addition alone - instant Spotlight-style search available from the home screen - goes a huge way in making the device very usable: finding the settings in Symbian had become a nightmare, but now locating a contact or a setting is fairly instant. 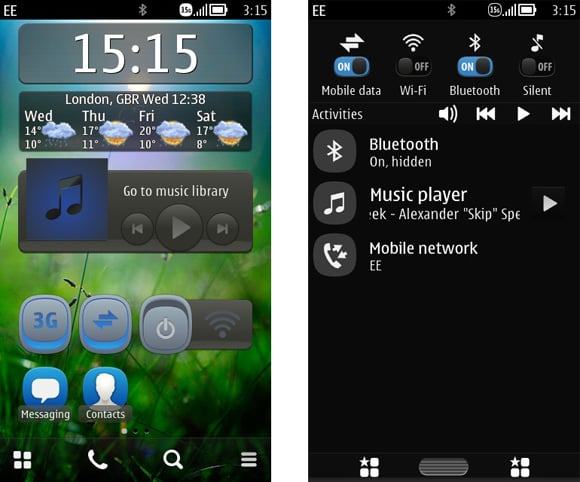 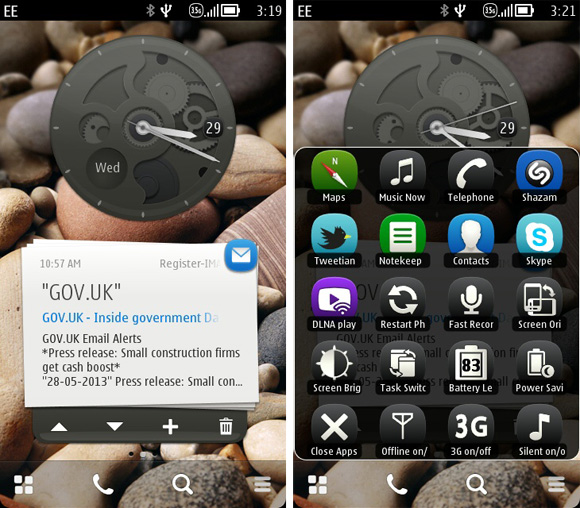 Nokia Belle's handy mail widget allows you to delete mails from the home screen (left); the third-party utility Belle Extra Buttons gives you a configurable pop-up with a swipe (right).

The once notorious on-screen widgets of information and configuration controls - an emblem of iPhone-era Symbian’s suckiness - now work very well. Nokia includes an impressive pack giving you very rapid access to a button to turn off Wi-Fi and 3G, for example, and a nicely functional email viewer, comparable to Android widgets in all but the amount of detail on offer. (The 808’s 640x380 screen is the constraint, here.) Generally, the widgets "just work".

I saw no lags in the image gallery or music playing applications, which are huge improvements and well up to snuff, although Gallery lumps everything in one continuous view for simplicity.

So the 808 PureView isn’t quite the horror of old. What else does it give you, other than the camera?

The main draw has to be the call quality and battery life, the latter of which comfortably lasts into a second day of operation. Just as designed, this is a deterministic system with no surprises. Overnight it will drain one or two per cent of the battery. Even with push email switched on I get well into a second day of use; if I throttle back email I often get a third day – all on a now modest 1350mAh battery.

The phone can juggle dozens of running applications at any one time, and if they need to run in the background – for example, syncing with Evernote - they’ll do so without overly draining the battery.

The phone's communications stack is a very well debugged – as it should be after a decade of running 3G. And it’s now bang up to date with high-quality voice calls. As a bonus, the version of VoIP client Skype for Symbian is probably the most parsimonious out there, in terms of power consumption. It lacks chat messaging and video calling, alas.

And the final highlight is Nokia’s outstanding mapping software, which it continued to update. This works offline, too. Nokia recently added a version of its superb public transport search app (look for "Public Transit") to Belle, but I found it fairly buggy – asking for "transport near me" just sent it into a spin.

What else? The quality of music playback is outstanding. Apple Mac users will need to use a third-party app called DoubleTwist to transfer files to the handset, but it’s a passable kludge that leaves iTunes playlists intact.

But that’s about it for the good news.

In daily use, you get the satisfaction of using an absolutely beautifully made device. A huge amount of care went into the design and build quality. It looks bulbous and unbalanced, but it’s far from uncomfortable, largely because it's narrower than today’s Android slabs. The downside is unavoidable: an app ecosystem that was poor in 2011 and very patchy today.

Next page: Meet the app store that time forgot
Page: