A team of researchers from Russia and South Korea claim to have taken the first sample of liquid blood from an adult woolly mammoth that was frozen in the permafrost of the New Siberian Islands. 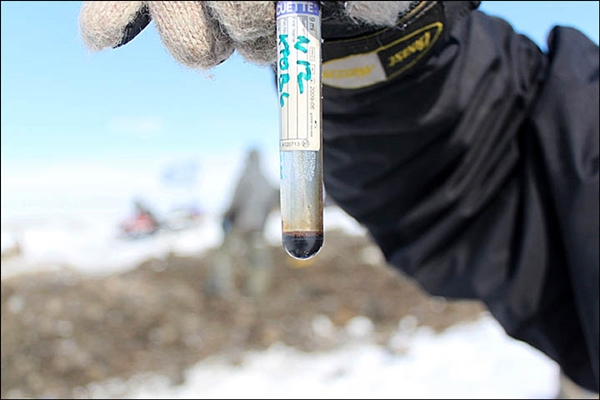 "We were really surprised to find mammoth blood and muscle tissue," said Semyon Grigoriev, head of the Museum of Mammoths of the Institute of Applied Ecology of the North at the North Eastern Federal University told Siberian Times. "It is the first time we managed to obtain mammoth blood. No-one has ever seen before how the mammoth's blood flows."

The sample was taken from the belly cavity of a 10,000-year-old female mammoth, thought to have been around 50 or 60 at time of death, which became bogged down in a swamp. The upper parts of the corpse were chewed up by scavengers but the lower parts remained entombed in ice, enabling the collection of samples from blood vessels, glands, and soft tissue.

Nevertheless, the temperature of the carcass was -10°​C, and Grigoriev said that the mammoth seems to have evolved blood that freezes at lower temperatures than its more tropical-based pachyderm cousins. He cited a 2010 analysis of mammoth DNA by Canadian researchers that found its haemoglobin would maintain oxygen levels better at cold temperatures than its Asian elephant descendant.

"We hope that at least one living cell of the mammoth was preserved, but even in such a good condition of the carcass the chances of this are small," he said. "Yet it is great luck that the blood preserved and we plan to study it carefully." 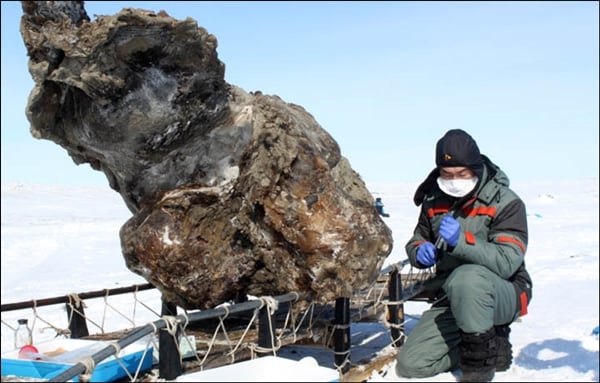 The bottom half of the frozen mammoth carcass

The remains of the mammoth carcass have been moved to a refrigerated location on the mainland and will be examined when the team returns in a few month's time to see if more samples can be taken.

Mammoths are generally believed to have become extinct over 10,000 years ago, although in remote Northern latitudes they are thought to have persisted until around 1,650BC – around the time of the Egyptian Middle Kingdom. But that could be about to change.

Last year, Russia’s North-Eastern Federal University signed an exclusive deal with the South Korean Bioengineering Research Institute for the rights to clone a mammoth from remains found in the Russian steppes. The institute is headed by controversial geneticist Hwang Woo-suk.

Hwang rose to fame at the turn of the century when he claimed a series of stunning breakthroughs in human embryonic stem cell research, but was later barred from working on human cell lines and given a two-year suspended jail sentence for falsifying data and breaching ethical guidelines.

He kept working in animal cloning research, however, and led the team that successfully cloned the first dog, an Afghan hound named Snuppy, in 2005. In 2011 they did the same with a coyote. Hwang has now set his sights on implanting an elephant with a cloned mammoth and resurrecting the extinct species. ®