It doesn't actually demonstrate any new properties of entanglement, but it's cool anyhow: a group of Austrian physicists have produced a video showing entanglement in real time.

Yep, what Einstein called “spooky action at a distance” is now on YouTube (below).

It took a fair amount of work for the scientists from the University of Vienna and the Austrian Academy of Sciences to assemble the video. The experiment was designed by PhD student Robert Fickler, using an intensified charge-coupled device (ICCD) camera to capture the two ends of the photonic entanglement.

As their http://www.nature.com/srep/2013/130529/srep01914/full/srep01914.html#affil-auth paper in Nature notes, “namely triggered intensified charge coupled device (ICCD) cameras are fast and sensitive enough to image in real-time the effect of the measurement of one photon on its entangled partner.”

The setup is shown below. 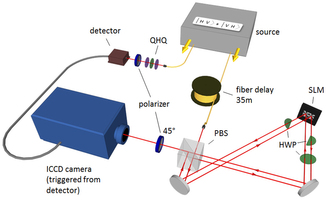 Two polarisation-entangled photons are produced in the grey box, one sent directly to a detector that triggers the camera, the other sent – with a long enough fibre to match the trigger delay – through a polarising beam splitter, three half-wave plates, a spatial light modulator and a polariser before arriving at the camera.

The correspondence between the light and dark areas on the video is showing how the measurement of one photon is affecting the polarisation of the other – in other words, entanglement in action. As the authors write: “the high-contrast minima and maxima shift in very good correspondence to the polarisation angle measured on the partner photon.”

To make sure they weren't just putting their own interpretation on what they saw, the researchers also measured the entanglement: “Since the registered signal of the camera depends linearly on the detected photon number, we determine the average signal per detected photon and its error margin from many single photon events”.

And there is a serious point to all of this: “With this relation between registered signal and corresponding photon number it is possible to spatially analyse any recorded intensity image without the need for individual counting of single photons over a time consuming data acquisition of many sparse images.” ®