Fibre is essential if you want a hi-def willy

Something for the Weekend, Sir? Some of my colleagues get writer's block. I suffer from reader's block. I may have a mild form of dyslexia or it may be due to having a very short attention ... you know, whatever.

Today, I am unable to reach the end of the following sentence without forgetting how it started. You have a go...

A multi-tiered, hybrid approach that differentiates between infrastructure and service-level competition can drive an optimum balance between national economic interests, free-market economics and a healthy telecommunications industry, that is able to provide affordable leading edge ICT services so necessary for economies going forward.

OK, I get the gist but what’s worrying me is that if I try reading the words up and down as well as left to right, and it doesn’t make any less sense.

It’s the concluding sentence of an Arthur D Little report on National Fibre Strategies, which you can read – or at least look at the words – here.

My business is communication, they tell me (you know, they), so permit me to save you some time by paraphrasing the entire report: ‘Copper bad, fibre good, want money, government pay’.

The one thing the report doesn’t determine is what super-fast broadband would be useful for, only that by using it could we overcome sub-optimal infrastructures and bring socioeconomic benefits that are tangible at the national level in terms of permanent contribution to oh god, I’ve already forgotten how this sentence began.

Not to worry, this week I witnessed for myself precisely why we need super-fast broadband, being alerted to the fact by the searing sound of screaming coming from the living room. I finished off an email, had a stretch and ambled over from the home office, hands in pockets, to see what the noise was all about. There was no need to rush since ear-splitting screams at Dabbs Towers could only mean one thing: HLW was laughing at something on TV.

I believe I have already mentioned my life partner’s penchant for watching filth on the small screen. It started years ago when someone offered her a couple of episodes of A Life of Grime for free, leading her into a steady intake of Hoarding: Buried Alive and ultimately leaving her hooked on the hard-core stuff: Embarrassing Bodies. She can’t get enough of this series and it frequently causes her to cry with laughter. She is a heartless gloater.

On-screen is a man showing his swollen right testicle to three doctors via his webcam. One of the doctors is described as a "penis expert". I can’t begin to imagine how disappointed his mum must have felt when he proudly showed off his new business cards. While Mark, 38, of Galway, is kneading his freshly shaved but melon-sized gonad in accordance to directions from the medical team in the studio, HLW is pretty much screamed out and is now having trouble inhaling.

Tomorrow, I suggest to her, we could go to the local mental hospital and laugh at the patients, or possibly take some sticks to the zoo for a pleasant afternoon of poking the animals.

The TV programme we’re watching is Embarrassing Bodies: Live from the Clinic and it involves ordinary people with extraordinary medical complaints choosing to consult a doctor via Channel 4 at 8pm, exposing their diseased organs to the nation on their webcams.

Dr P Expert rounded up his consultation by telling Buster Gonad that he would like to see a scan of his testicle, and for an appalled moment I thought he was directing the patient to heave his bristling pink mansack onto his own flatbed scanner. This surely would have been BYOD gone mad. 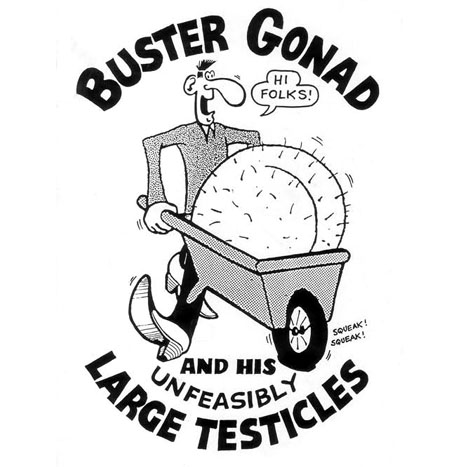 A reality TV celebrity in the making, who'd have thought it?
Source: Viz comics' regular Buster.

At first, I am drawn in by some splendid soundbites such as Richard, 44, of Chelmsford, declaring: “I spend half the day wiping my bottom.” Then I am hypnotised by some of the appalling decor and ornaments visible in the patients’ lounges and spare bedrooms, especially the glazed pottery choirboys owned by Brian, 34, of Bridlington.

Yet... not perfectly accurate. The patient revealing his flabby bum to Amanda Pays’ 1985 CRT screen moves in sharp focus in a surreal, analogue VHS kind of way, while 2013’s Alison, 46, of Castleford is not just enormously fat but also suffering from video latency problems, her mouth movements always a couple of seconds behind her voice. Worse is Kevin, 46, of Grimsby who must be using a 2400baud dial-up modem; either that or we’re looking at a still image taken while he was asleep while he performs a Norman Collier impersonation over the mic.

With the studio doctors struggling to cover the awkward silences inherent in webcam conversations when one party has woeful internet access, the process is like interviewing astronauts just before they swing around the dark side of the Moon.

Frankly, if ever there was a real-world purpose for replacing slow copper with fast fibre, this must be it. Why trouble yourself with socioeconomic explanations, when seeing genital sores in hi-def an hour before the watershed is what we really want from super-fast broadband? We’ve got our own computers, cameras, the whole kit – now give us the futuristic network access we were promised by cyberpunk TV movies so I can give John Thomas his 15 seconds of fame. ®

BT strikes to start this month, 40,000 workers to down tools

Polymers can transmit at 53Gbps without error correction overheads, and could be just the thing for electric cars
Networks24 Sep 2021 | 27