Hands-on The Western world's smartphone market has devolved into a duopoly of Apple's iOS and Google's Android. In the rest of the world, however, the mobile story has yet to be written... and this is where Mozilla hopes users will embrace its mobile operating system, Firefox OS.

The browser-maker wants Firefox OS to be the gateway drug to the wider Mozilla software platform for the web's next billion users.

Firefox OS simulators have been available for developers for some time, but it wasn't until recently that hardware sanctioned by Mozilla was available for testing. The first actual devices running Firefox OS are two "developer" phones from Spanish manufacturer Geeksphone - the Keon and the Peak.

Keon: It's not an iPhone replacement, but it's bloody good for €100

While it's fun to play with the Keon, it's not the hardware that’s special - it's Firefox OS. After living with the Keon for more than a month, I can safely say Mozilla's vision of a web-based mobile future isn't just appealing, it feels inevitable.

There are some rough edges, though. Firefox OS is definitely not the new and shiny you've been looking for, rather it's the new and quietly revolutionary. The Keon as is comes pretty close to offering everything you'd need in a mobile device, but it's still not likely to tempt iOS or Android fans to switch. And that's just fine with Mozilla. The target market for Firefox OS isn't current iOS or Android users, it's the rest of the world - people who don't yet have a mobile internet device at all.

But before Firefox OS takes the currently-not-connected world by storm, it first has to get developers interested, hence the Keon phone. 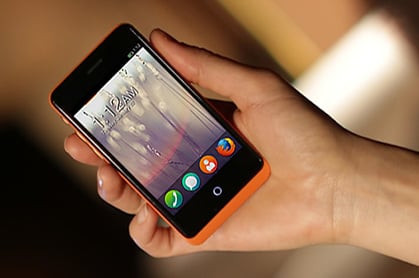 The Keon is a solidly built piece of hardware with decent, though not great, specs and a screen that looks nearly identical to the iPhone 3G/GS.

The Keon has a 3.5-inch HVGA screen, 1GHz single-core processor, 512MB RAM, 3MP camera and 1,580mAh battery with up to a day's battery life. By contrast, the more recent iPhone - the 5 - packs a 4-inch screen, 1.2GHz dual-core chip, 1GB memory, 8MP rear and 1.2MP front camera, and allows up to eight hours of usage on the battery.

In short, the Keon's not going to wow gadget enthusiasts but it's about what you'd expect from a €100 (approximately) device: a good phone with a few compromises to make it affordable. However, it's a perfectly capable phone for developers who need to test their apps.

And it is developers, not end users, that Mozilla wants for Firefox OS right now because, after all, the Firefox OS simulator will only gets you so far. Some things, like apps that take advantage of the accelerometer or user location, really need to be tested in the real world, which is what developers can do with the Keon.

Developers can make or break a platform but Mozilla has a distinct advantage over other platforms trying to break into the iOS-Android duopoly: the web.

Firefox OS apps are built using the same basic toolkit you'd use to build any website: HTML, CSS and JavaScript. It's tempting to say if you can built a webpage you can build a Firefox OS app. Technically that's true: any webpage can be installed as a Firefox OS app even if its author has never heard of Firefox OS, but to take advantage of the unique attributes of a mobile device you'll need to go a little beyond a simple webpage.

Most of the apps that ship with Firefox OS use this model, including the Nokia maps app which will load up just fine without a connection, though of course - like its counterparts on Android and iOS - it can't load any map data without some sort of link to the internet. But if the words "web apps" scare you, don't worry: what Mozilla calls "packaged apps" behave, from a user point of view, just like an application on your iPhone.

Firefox OS is the best showcase I've seen for the old argument that web apps can compete with native apps. Here everything feels native and yet everything feels like the web. In fact I often would forget whether I was looking at Twitter in the Twitter app or using the web browser - the rendering is all done by Firefox so it looks the same. That's not to say there aren't some pain points. To stick with the Twitter example, part of the reason I would use both the app and the mobile site in the browser is that the app doesn't support multiple accounts.

And that's where Firefox OS just might have an ace up its sleeve: there are far, far more people out there who know how to build web apps than there are that can write C or C++ apps for other platforms. And the overwhelming demand for the Keon and Peak is a good indicator there are a lot of interested developers - the initial supply of both phones sold out in a matter of hours.

Next page: The web-developer angle is self evident
Page: