It is refreshing to see that someone pays attention in the server racket. It is also annoying that it has taken a top-tier server maker so long to get a true system out the door that is suitable for small and midrange businesses. But Dell may have finally done it with its PowerEdge VRTX. 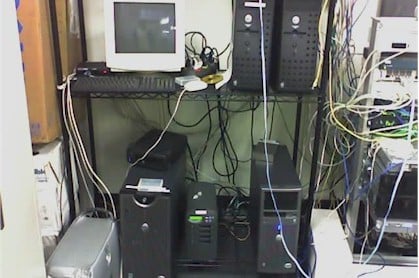 For a decade, the companies making enterprise-class blade and rack servers have been trying to push this heavy iron into SMB shops, and it is completely overkill.

And thus, the companies that could benefit most from a truly integrated system - complete with multiple server nodes, sufficient and shared storage to back-end them, and switching to link them to each other and the outside world - instead have bought one and then many el cheapo tower servers and crammed them into a closet or put them on a shelf, with a spaghetti monster of network and power cables linking it all together. (You know who you are, and for the better part of a decade I was one of you.)

Brian Payne, executive director for PowerEdge servers at Dell, tells El Reg that there are more than 23 million remote offices in the world, and managing the hodge-podge of hardware is a pain in the neck. Ditto for the other 27 million small and medium businesses that have equally messy infrastructure in the United States, and untold tens of millions more globally who want something a little more integrated, tidy, and expandable.

The typical remote office, says Payne, has an average of 2.4 servers, some kind of external storage array, a switch, and multiple management consoles for all of these bits of hardware.

Enter the PowerEdge VRTX, which is pronounced "vertex" of course and apparently is meant to invoke the Z, Y, and axes of server, storage, and networking. This machine comes in a standard tower chassis and when tipped on its side can be mounted in a rack and eats up 5U of space, like other tower servers.

It is a baby blade server chassis that has integrated, shared storage and switching. It is the kind of blade server that Dell, IBM, and Hewlett-Packard have been chastised by this server hack for not creating for the past ten years. 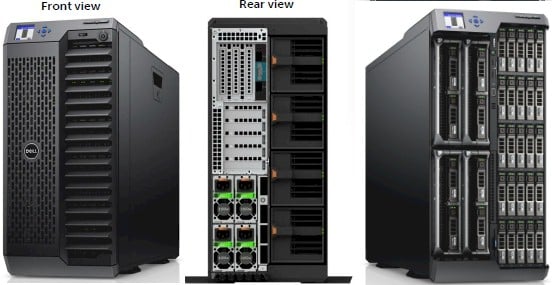 As you can see in the chart above, the PowerEdge VRTX has four blade server slots on the left hand side of the tower enclosure if you tear the locking cover off. These are not funky blades that are only designed for this specific box, but the same PowerEdge M520 blades based on Intel Xeon E5-2400 processors and the PowerEdge M620 blades based on the Xeon E5-2600 processors that Dell sells for its M1000e blade server enclosure.

These are both two-socket blades, and Payne says that Dell has no plans for a single-socket blade because there is no customer demand for it, but for some workloads, having a cheap Xeon E3 uniprocessor node would be an attractive option for SMBs where the workloads are modest and the budgets are tight.

On the right side of the chassis, there is room for 25 disk or flash drives in 2.5-inch form factors or a dozen units in 3.5-inch sizes. There is a single shared DVD drive on the front panel as well as KVM ports for hooking in for management.

In the back of the tower system (and I mean system in the classic sense of a machine that includes compute, storage, and networking) there are two to four hot-plug power supplies rated at 1100 watts each. The back-end of the box has six fan modules and four blower modules to keep all this gear from melting.

The chassis has a PCI-Express 2.0 switch that links the server nodes to the shared storage through a modified version of Dell's PERC8 disk controller. That switch also links eight PCI-Express slots (five low-profile slots capable of supporting up to 25 watts) and three full-height/full length PCI slots that can have peripherals that burn as much as 150 watts in them. (If you use one as a double-wide, you can burn 225 watts.)

The box includes an integrated Gigabit Ethernet switch with sixteen internal ports and eight external ones; you can also use an eight-port passthrough module if you want to hook into an external switch to reach the network.

And finally, there is a chassis management controller, or CMC, that provides a unified management console for all of the hardware components.

The system has a phone-home capability for tech support anc can be configured to automagically create trouble tickets when something is going wrong (useful for remote offices) and the OpenManage Essentials tool from Dell has now has a geographical view feature that, as the name suggests, presents a geographical view for all of the PowerEdge VRTX machines that might be scattered around remote and branch offices.

Payne says that the machine is designed to work with VMware's ESXi server virtualization and vCenter virtualization management console as well as Microsoft's Hyper-V and System Center combo.

Dell has evaluation PowerEdge VRTX systems out in the field and will have them generally available in either late June or early July. Target customers include retail stores, hotel chains, healthcare clinics, law offices, and schools.

Pricing has not been set yet, but Payne says there will be a fixed configuration at launch that would be used to replace a couple of tower servers at a cost of under $10,000 for two servers and 3TB of storage. In larger scale deployments, such as among retailers who have a mix of relatively heavy workloads in the stores, they will need a fatter box and pricing will range from around $15,000 to $25,000. ®