Yes, now lightbulbs can glow red when your squeeze arrives

The Philips Hue lightbulbs are the Internet of Things made real: multicoloured light bulbs with network connectivity and cloud control, with only the outrageous price preventing world domination.

The bulbs come beautifully packaged in a three-light starter pack, along with a controlling hub. The bulbs fit into a standard screw socket and connect wirelessly to the Ethernet-connected hub – and even each other.

A smartphone app (for Android and iOS) gets you up and running within a few minutes, but it’s the documented programming interfaces and social network interconnection that may justify the £179.95 price tag. 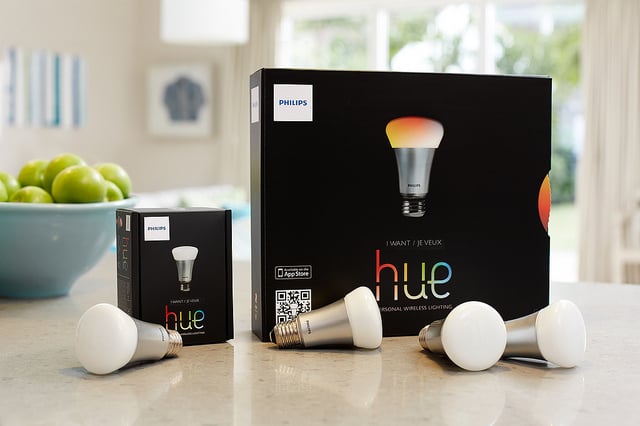 The box set is on the right, the additional bulbs come in at £50 a pop

Despite the availability of an Android client and open programming interface (API), the lights are only available though the Apple store, presumably on the assumption that only iPhone fans are prepared to pay that kind of money for lighting.

Support for Android is pretty good, but it’s the integration with If This Then That (IFTTT) that enables one to lock the lighting into one's social networking presences: IFTTT allows you to do stuff such as "if I'm tagged in a photo then blink lights to let me know".

Unpacking and fitting the bulbs really couldn't be easier - they are slightly larger than a standard R80 but should fit within most shades. There's no bayonet fitting as yet; there's no technical reason why not, given that the specialist nature of these uberbulbs means buyers are probably willing to change their sockets if necessary. 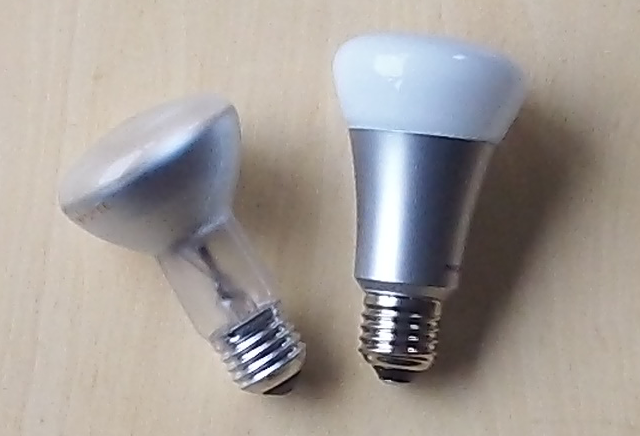 The Hue bulb (on the right) is slightly larger than the R63 it replaced, but fits easily enough

Once powered up, the bulbs network together and connect themselves to the hub. The wireless protocol is Zigbee, meaning every bulb can also be a router. Connectivity can spread from the hub, but that does introduce a latency, as commands over the network are sent to the hub and forwarded on. We'll return to the implications of that later.

Once the hardware is in place, you plug a Cat-5 cable into the hub and download the mobile app from iTunes or Google Play. Then you just press the button on the hub for security and it's good to go.

The Android app lets users colour each bulb using photographs (examples supplied), while the iOS version adds scheduled lighting and proximity detection; you can have the lights turn a sexy red when the object of your affection arrives (assuming said object is carrying an iPhone, natch), but that's really only the very start of what's possible. 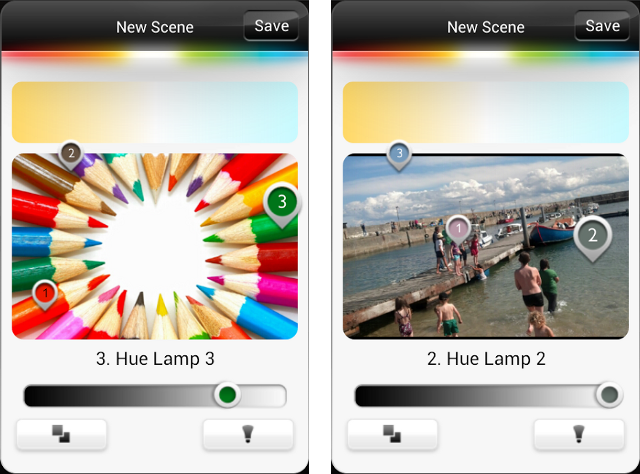 Pick colours from the supplied examples, or your own photos

As well as scheduling and proximity controls the Hue lights now link in to IFTTT, the (currently) free service which connects clouds together to trigger events, such as tweeting when the local temperature rises, updating Facebook when a blog is updated, or (with Hue thrown into the mix) wash the room in Spurs blue whenever Gareth Bale knocks one into the back of the net.

Setting up IFTTT is trivial. You pick a trigger (such as an incoming phone call or calendar event) and an action (flash a light, cycle through the colours or plunge the room into darkness, for example) and switch it on. Hue will be a "that", but not a "this" - a Hue light can't be used to trigger other actions, but flashing the lights for every incoming e-mail does lend an air of importance to one's communication.

IFTTT also takes care of the alarm clock function, offering timed events, but nothing is instant – "that" can happen several minutes after "this", so it's best not to rely on it too heavily.

But if IFTTT isn't enough, there's an open API to play with; the Hue hub has its own HTTP server and accepts simple JSON requests. It is possible to complicate matters with wrappers and objects, and there's a range of libraries to add functionality to all the popular platforms and languages, but the Javascript examples show how simple it can be:

The communication is with the hub, which passes commands onto the lights using Zigbee, and that does introduce some latency. At times a light can take 20-30 seconds to respond to a command, and the same command sent to all three lights can result in mismatched lighting while it propagates. Best forget about video-linked lighting, or colour changes matched to the music currently playing.

Even as disco lighting the Hue is more suited to freeform jazz than modern dubstep, changing shades at a relaxed pace well suited to Terje Rypdal but easily outpaced by Gangstergrass.

The acid test for any lightbulb, no matter how fancy, is how well it lights a room. LED lights lack the warmth of filament bulbs even when set to the right colour, but that's a common problem these days. Hue's red and blue tones are strong enough to paint an entire room in your desired colour, but the green is decidedly weak and yellow is hardly distinguishable from white, which is a shame.

Controlling the lights from a smartphone also becomes an issue once the novelty wears off. When it's midnight and you're trying to collect up the glasses from the living room and go to bed, finding a smartphone and waiting for the app to boot becomes a right palaver. At that point the temptation to flick the wall switch is almost overpowering - but give in, and all the automated stuff which makes the Hue so cool stops working until the power is back.

So as a replacement for existing lights the Hue is a bit of a non-starter; at least, until our wall switches get connected to IFTTT (which itself needs to become a good deal more responsive), begging the question: what it is good for?

As a first step towards the Internet of Things the Hue is amazing. Link it to a Raspberry Pi and one's living room undoubtedly gains huge geek credibility. Slightly more rational might be a bedside Hue, linked to an IFTTT timer, or perhaps one in the kitchen linked to the weather and one for the living room for sports scores, with all three lighting up for Google calendar events.

Such an arrangement might help justify the £179.95 price tag, but you would need screw-fit sockets around the place (or the wherewithal to fit them) and other lighting, linked to wall sockets, for day-to-day use.

Philips Hue may well be the future of lighting, and if money isn't a problem then it's an amazing toy. But at that price it's impossible to recommend investing in Hue all over your house, colourful as your life might become. ®