Calxeda says the fact that Gigabyte, Foxconn, and Aaeon have lined up to use the current 32-bit parts in machines they have crafted proves there is demand. Data center shoppers who buy directly from them and OEM customers who buy iron and then peddle it to customers for 32-bit ARM server chipswill still buy even though everyone knows that 64-bit chips are expected to be widely available from a number of vendors, including Calxeda, next year.

"These are functional systems, built based on Calxeda reference designs," explains Karl Freund, vice president of marketing at Calxeda in an email exchange with El Reg. "Aaeon and Gigabyte can ship today - and are - while Foxconn, as you would expect, is has a longer lead time because of the OEMs they are working with."

All three ODMs are primarily sticking to serving the Asian market with their EnergyCore-based boxes, but says Freund, Gigabyte and Aaeon are also getting hooked into the North American market to chase business. Much as Taiwanese server maker Quanta has done by launching a US operation earlier this year and bragging about its server prowess on a global scale.

"These guys are smart," continued Freund, talking about the three new ODMs Calxeda has lined up. "They see the future and want to use Calxeda to realize an inflection point in the scope of their business. Foxconn is more focused on large-accounts, working with its OEMs to design a product for Asian and other markets, but served through their customer channels."

The distinction between a server and a storage array is blurring, and this is certainly the case with the system designs coming out of Calxeda's new partners in Asia that were announced at Computex today.

The Gigabyte H2C1 server shown above is aimed at "ultra-efficient" web hosting, as Gigabyte puts it, which means modest workloads with perhaps smaller web sites running on one socket. This particular machine starts with a 2U chassis and puts six of the EnergyCard compute cards, which have four EnergyCore EXC-1000 chips soldered to them plus SATA ports and main memory. The design can have a dozen 3.5-inch disk drives or two dozen 2.5-inch disks.

The integrated networking that comes off the EnergyCore processors - remember, the chip has its own distributed Layer 2 Ethernet switch built onto it - can provide four 10Gb/sec uplinks out of the box for those 24 nodes to share and another four 10Gb/sec interlinks for hooking multiple enclosures together in a cluster.

The Poseidon storage server from Aaeon

The box shown above, which has the name Poseidon on the box but is referred to as the Indus storage appliance server, comes from Aaeon, which is a division of Asus. It comes in a 1U rack-mounted chassis and has two ECX-1000 compute nodes, and that must mean two sockets and therefore that Calxeda has cooked up a smaller EnergyCard than the one that other OEMs and ODMs are using. (Or, that it only puts two chips on a circuit board that could do four, although that would be wasteful.)

Anyway, the Indus storage appliance server can have up to ten 3.5-inch disk drives inside of that pizza box chassis, for a total of 40TB of usable storage using 4TB SATA drives. The on-chip networking on the two ECX-1000 chips is configured to have two 10Gb/sec uplinks to the servers and four 10Gb/sec links to lash together multiple nodes into a clustered file system. 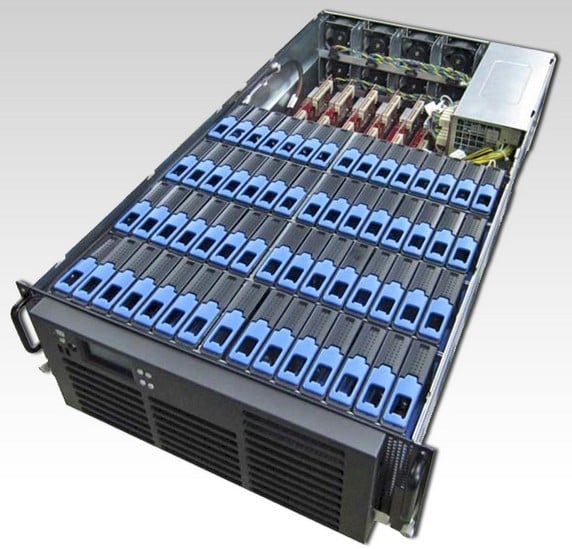 Foxconn, which has a name that is almost as familiar to the world as IBM, Dell, and HP thanks to the fact that it manufacturers Apple's smartphones and tablets, has used the Calxeda ARM processors as the basis of a storage appliance as well.

This particular one comes in a 4U chassis and mounts 60 3.5-inch disk drives into three rows of 20 for up to 240TB of capacity using 4TB drives. This machine has a dozen ECX-1000 chips on its cards, and if you look carefully at that picture, then you can see that in the back, to the left of the power supply and behind the back row of drives, there are six EnergyCards.

So that means there is indeed a two-socket EnergyCard that we have not seen to date from Calxeda. And, in fact, Calxeda said it was showing off a new storage board set code-named "TerraNova" that did SATA links out to drives without cables (presumably directly off the backplane that both drives and the EnergyCards plug into.)

The on-chip Layer 2 switch that runs across the dozen sockets is cut up into four 10Gb/sec uplinks to the outside world and six 10Gb/sec links that can be used to cluster multiple storage servers together using a cluster file system like Lustre, Gluster, or Ceph.

This so-called "storage server" from Foxconn could make a very interesting box for running the Hadoop big data muncher. You could allocate ten drives to each four core ECX-1000 processor if your Hadoop jobs were not compute or memory bound. ®