The media 'doesn't believe in facts,' but the internet will come to the planet's rescue

"You can hold back knowledge, but you cannot prevent it from spreading," Schmidt told his audience at his company's "How Green Is the Internet? Summit" in Mountain View on Thursday. "You can lie about the effects of climate change, but eventually you'll be seen as a liar."

Speaking to the assembled crowd of engineers and technologists at a conference on the greening of the data center and internet from the cloud to end-user devices, Schmidt was enthusiastic about the promise of the Summit. "I am beyond excited that we're doing this," he said, "spending a whole day about something I care a lot about with people who understand the nature of the future in this are. Who get the facts right."

Schmidt discussed what he referred to as "the fact problem" and how it relates to the media and governments. At Google, he said, people fact-check what they're told, especially if what they hear doesn't sound quite right.

"Can you imagine if climate-change discussions were run that way?" he asked.

Speaking specifically about China and other emerging countries, he said that as he sees it "the math doesn't add up" when it comes to addressing climate change.

"The math says that there are a couple of billion people who are going to want our carbon footprint," he said, "and we can't afford that carbon footprint as a global thing – and we don't want to reduce our own." 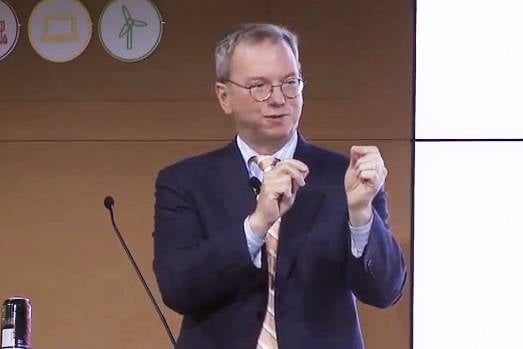 Eric Schmidt: 'The math doesn't add up' in how the globe is approaching carbon emissions

That innovation is the solution to the growing problem of climate change, Schmidt said. "Come up with things that use less carbon – more efficient, new materials, and so forth."

Including himself among the assembled Real Smart People™, he said, "That's what we do. That's our job. That's why what you all are doing is so important."

And that pesky carbon problem is only going to get bigger, Schmidt said, as internet use increases and data centers will need to be built to service the five to six billion internet users that he says will occupy the planet in the next decade or so.

"The majority of humans will be on the internet," he said.

But an increased number of people in developing countries sharing information, Schmidt believes, will eventually lead to a global understanding of the threat of climate change. "It may take five years or ten years," he said. "A true global emergency, which is underway, will eventually be noticed by the people whose water sources dry up, are victims of terrible variations in climate, on and on – we all know what the issues are."

Schmidt told the Summit attendees that these directly affected, internet-enabled people will be open to their messages of increased efficiency and green technology. "You'll have an audience that you didn't have before, and they'll show you what the market looks like," he said. "And they're amenable to solutions that address both their need to move to modernity as well as their need to be respectful to the globe."

He said that during his travels, he has visited many less-developed countries, and has been impressed with the efficiencies and careful cultivation of resources that he has seen. In the Congo and Rwanda, for example, ecologically sensitive farming methods that have been in use for generations, he said, that recycle water and other resources.

"I was struck, in all my travels, how incredibly ingenious people are," he said.

Getting back to climate change, Schmidt said, "The framing goes something like this: there's a real problem. The math doesn't work. The solution is the use of the internet to create an awareness and empower individuals. You empower those individuals to come up with creative solutions."

Those solutions, he said, should be focused on "not making the climatic situation worse" while improving people's lives.

"It's not that complicated," Schmidt said. "I think that it's an opportunity that, working with Google and others, we can get these messages out."

And, one would hope, spark some of the ingenuity that he referred to – and quickly. "What you all are trying to do," Schmidt told his audience, "and what we are trying to do together to innovate in this space, is the only solution that I can see that can reverse the math that we're going to see in the next couple of decades." ®