Study: US iPhone owners tend to be rich, educated, white

Google's Android is the most popular smartphone platform in the US market as a whole, but wealthy, highly educated customers still prefer iPhones, according to a new study.

The Pew Research Center conducted a telephone survey of 2,252 American adults between April 17 and May 19 of 2013 and found that overall smartphone ownership correlated closely with both income and education.

In general, the more money respondents made and the more educated they were, the more likely they were to have a smartphone, as opposed to a feature phone. But when it came to which smartphone platform the respondents used, the numbers differed.

Although Android adoption was roughly the same across various income and education levels, respondents on the high end of either scale were far more likely to say they owned an iPhone.

In fact, of those respondents who reported owning a mobile phone and whose household income was $150,000 or more, fully 49 per cent said their phone was an iPhone. Among those who reported household income between $75,000 and $150,000, only 40 per cent said they owned an iPhone, and iPhone ownership became less and less common as income levels dropped.

By comparison, between 27 and 31 per cent of respondents reported owning an Android device, consistent across all of the income levels sampled.

On the opposite end of the education spectrum, the picture is dramatically different. Only 11 per cent of those who hadn't graduated high school said they had an iPhone, while 25 per cent said they had an Android phone.

And again, while Android ownership was fairly consistent across all education levels, there seemed to be a direct correlation between respondents' education levels and their likelihood of owning an iPhone. 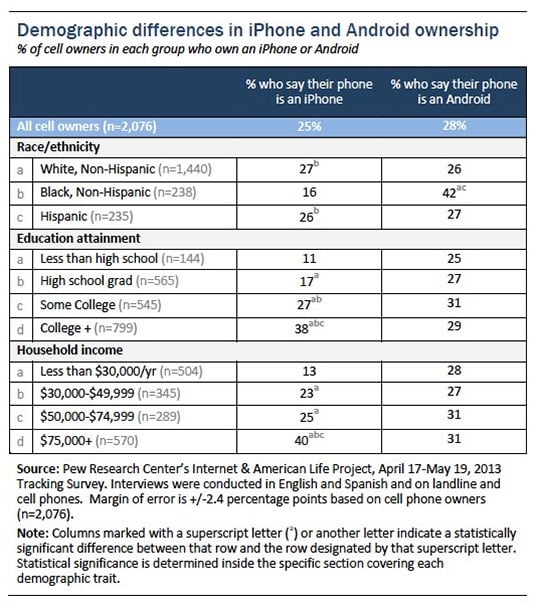 Just what explains these discrepancies is hard to say. Certainly there are Android phones available that cost just as much as iPhones, or more. And Samsung phones in particular are so similar to iPhones that Apple has been busy suing the Korean firm for patent infringement all over the world.

Consider, though, that the Pew study also found that African-Americans were much less likely to own an iPhone than were whites or Hispanics. Only 16 per cent reported owning one, compared to 42 per cent who said they had an Android phone.

This, despite the fact that African-Americans were actually more likely to own a smartphone than either of the other ethnic groups surveyed: 64 per cent said they owned one, compared to 60 per cent for Hispanics and 53 per cent for whites.

It may ultimately be the case that a smartphone customer's choice of platform has far more to do with fashion than any of the vendors would like to admit. ®

Commissioner to device makers: 'We're not forcing anybody to enter the internal market, but if they want to do so, they must comply'
Personal Tech7 Jun 2022 | 277