Al Gore: Stop using the atmosphere as 'an open sewer

According to former US vice president and climate activist Al Gore, the world faces "a climate crisis of unprecedented proportions," and the data center industry can – and should – make a tremendous contribution towards averting climate-change disaster.

Speaking at Google's "How Green Is the Internet? Summit" at the company's Mountain View headquarters on Thursday, Gore reiterated his belief that global warming is real, and that its effects are already upon us.

Gore's presentation at the gathering, which is focused on energy efficiency in the data center, was awash with statistics but slim on deep scientific exploration of global warming and its concomitant climate change.

"It's worth remembering that on a daily basis we now put 90 million tons of global-warming pollution into the thin shell of atmosphere surrounding the planet every single day," Gore said, adding that twenty per cent of what humankind is currently pumping into the atmosphere will still be there 10,000 years from now.

"And it does obey the laws of physics," he said. "It does trap a lot of heat. Scientists have known that for more than a hundred and fifty years."

Ironically, he said, the first paper on what eventually became known as the greenhouse effect was published the same year that the first oil well was drilled in Pennsylvania. Since that well was drilled, the use of oil along with coal, gas, and other carbon-based fuels has grown to provide 85 per cent of the energy used by what he called "Earth, Inc." 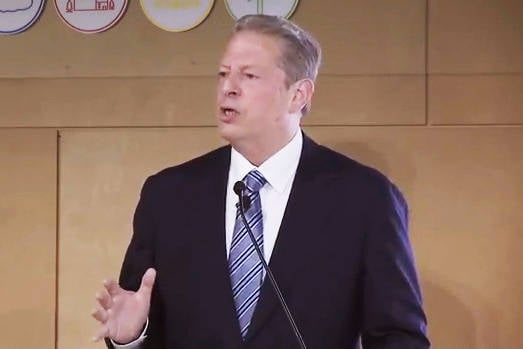 The daily weather news is like "a nature hike through the The Book of Revelation," says Al Gore

He reminded the Summit attendees that although the atmosphere may appear limitless, it's actually quite a thin layer encasing the Earth. "If you could get into a Google self-driving car and drive straight upwards at normal highway speeds," he said, "it would take less than 10 minutes to get to the top of the sky."

According to Gore, "our planet is running a fever," and the effects of that extra energy is resulting in extreme weather. "When you turn on the news on any given day, he said," it's more likely than not to be a nature hike through the The Book of Revelation."

He went on to describe such recent extreme weather events as the current 500-year flood in southern Germany and fatal flooding in Prague's city center, flooding in the US states of Illinois and Missouri, storm surges in New York as a result of Hurricane Sandy that added to the $110bn in climate-related US disasters last year, recent floods in Pakistan that displaced 20 million people, and a storm in Queensland, Australia, that dropped 48 inches of rain in "24 hours or thereabouts," he said.

"We have to connect the dots between this 90 million tons per day of global-warming pollution that we're spewing into the atmosphere as if it is an open sewer," he said, "and the disruption of the climate conditions that have nurtured and made possible the flourishing of human civilization since the beginning of the first cities less than 10,000 years ago."

That's the bad news. The good news, Gore said, is that the "digital revolution and the information explosion" are providing us with "incredibly powerful tools" that can be used to solve the problem of increased global-warming pollution.

He also cited scientific and technological advances that he says are enabling a steep "cost down-curve" in green-energy technologies – solar and wind in particular – and also improved efficiencies.

These faster-than-expected improvements, however, face stiff opposition, Gore said, from "legacy wealthy and powerful industries" that are using their clout to derail governmental efforts to advance green technologies.

There's another problem, as well. "American democracy has been hacked," he said. "It no longer operates in the public interest – I'm sorry to tell you that if you didn't already know it. I mean, seriously, it's pitiful. It really is pitiful."

There is hope to be found, however, in what Gore characterized as "the great companies of the digital era – Google, and Apple, and Microsoft, et cetera," which he said are stepping forward to play a leadership role in green technology.

He congratulated Google for its recent investments in a Swedish wind farm and its billion-dollar investment in a "Hoover's Dam–worth" of clean power projects. The Apple board member also congratulated his own company for achieving what he said was 100 per cent clean-power support for its data centers and its headquarters – though he admitted that much more needs to be done with Apple's other properties.

Green power is all well and good, Gore said, but efficiency is key to improving the carbon footprint of data centers, which he said currently contribute 2 per cent of all global-warming pollution in the US. "And of course," he said, "that number is going to be growing very, very rapidly" as the much-vaunted "internet of things" grows.

"Here's another statistic," he said. "Within seven years there will be 50 billion intelligent devices connected to the internet." Those devices will, of course, require their own data infrastructure, pollution from data centers will increase, and efficiencies will need to increase to limit that pollution.

Those efficiencies, Gore said, will come from such efforts as more intelligent failover systems that don't require as much data center redundancy as that which is currently in use to ensure always-on services and to support surges in demand. Eliminating diesel generators as backup power sources? Another must-do.

Globally, Gore said, data centers currently consume 30 billion watts of electricity, and with the increase in the number of data centers for cloud usage and the internet of things, "It's obvious that we have to make a change." ®