Security researchers at Kaspersky Lab report that a recently discovered Android Trojan is the most sophisticated such mobile malware yet to be identified.

In a post to Kaspersky Lab's Securelist blog, security expert Roman Unuchek describes the malicious program, dubbed Backdoor.AndroidOS.Obad.a or "Obad" for short, as being closer to Windows malware than to your typical mobile Trojan, owing to its complexity and sophistication.

Obad uses multiple layers of encryption and code obfuscation to conceal what it's doing, and it exploits previously unknown vulnerabilities in the Android OS to gain near total control over a device.

It runs in the background and has no visible user interface, but communicates with command and control (C&C) servers over the device's internet connection, and can even accept commands via SMS text messages.

Worse, once Obad gains Device Administrator privileges, it takes advantage of an Android vulnerability to hide itself from the list of applications that have such privileges, making it impossible for the user to remove it from the device.

Once installed, Obad can be commanded to perform a variety of functions. It can connect to internet addresses, ping servers, download files from servers and install them, and send text messages. It can also send data about the compromised device to the C&C servers, including information about installed applications and the user's contact data. 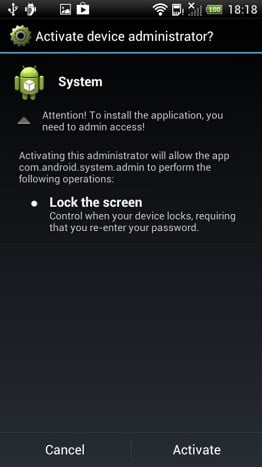 On the more sophisticated side, Obad can allow cybercriminals to execute console commands via remote shell, send files to all detected Bluetooth devices, and can act as a proxy server, sending data to a specified address and returning the response.

What's more, Obad has the ability to block the device's screen for up to ten seconds, to help conceal its malicious activity from the user.

Kaspersky Lab has offered no theory as to who might be running the Obad malware, and no point of origin has been identified.

Unuchek says Kaspersky has already informed Google about the Android vulnerabilities exploited by the Trojan, and Obad can now be detected by security software from Kaspersky and other vendors.

If there is a bright spot to any of this, it's that however sophisticated, Obad is still relatively rare. Over a three-day observation period, Kaspersky Lab found that Obad accounted for no more than 0.15 per cent of all attempts to infect mobile devices with malware – for now, at least. ®