For the last two decades videoconferencing manufacturers have been touting their systems as the ultimate tool for remote workers. Now Cisco has added one of its "telepresence" systems to a remote-control robot that can wander around the office meeting people and performing inspections. 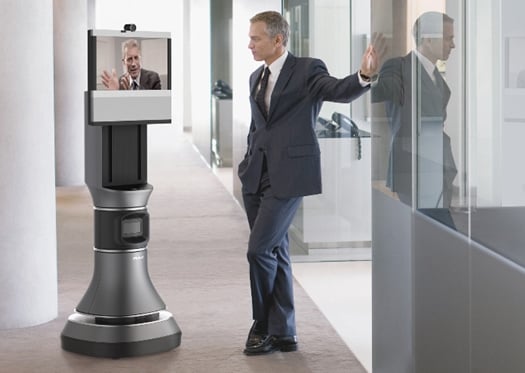 Now your boss can really be a heartless robot

The AVA (short for avatar) 500 unit is being built by iRobot (makers of the Roomba automatic vacuum cleaner) and consists of a robotic column topped off with Cisco’s TelePresence EX60 unit and a 21.5-inch screen. Users can access the robot with an iPad and direct it to a meeting location, adjusting the height of the screen to suit the user.

"With AVA 500 remote collaboration can happen anywhere," said Marcio Macedo, director of product management at iRobot. "You can have impromptu sidebars, hallway conversations, you name it. AVA enables freedom of movement, locations spontaneity, and the embodiment of the remote user from thousands of miles away."

Once installed, the AVA 500 maps out its office surroundings so that it can be programmed to go automatically to a location, while using sensors to avoid new obstacles or people getting in the way. Users can opt to travel with the screen off, or leave it on so they can scan the office and chat to people on their way to a meeting.

Like its iRobot lawn-mowing and vacuum-cleaning counterparts, the AVA 500 is smart enough to recharge itself in a special dock when it needs more juice. Cisco and iRobot envisage companies having a few AVAs sitting in an office that can be fired up and moved to meetings as needed. 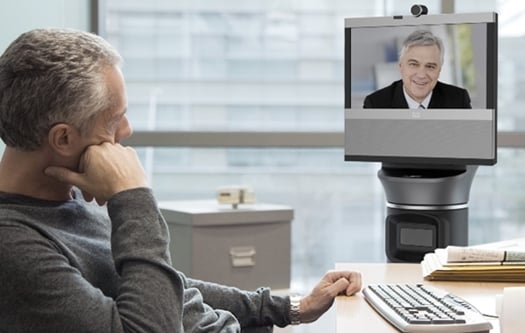 A quick chat before heading home for a recharge

The AVA 500 won’t be available until early next year and will be sold through Cisco's channel partners. Full pricing hasn’t been released as yet but it will be available either to buy outright or to lease for $2,500 per month, a Cisco spokeswomen told El Reg.

Which raises an interesting question. Remote working is supposed to be a great way to save on the costs of office space and travel costs, but the savings would need to be offset by the high cost of the AVA 500 to buy or rent.

In addition, from watching the promotional video, the tall, slender unit also looks somewhat top-heavy, might have problems with ramps, and is a dead-loss at handling stairs. It looks as though it could easily be knocked over by someone not looking where they are going, which could prove to be very expensive.