The toy of tech: The Mattel Aquarius 30 years on

'A machine so cheesy, they should have supplied rubber gloves to wear while using it.'

Archaeologic Once described by Creative Computing journalist David Ahl as “a machine so cheesy, they should have supplied rubber gloves to wear while using it”, the Mattel Aquarius was launched in the UK - and went on sale in the States - 30 years ago this month.

Ahl, writing up a list in September 1985 of the worst computers to date, went overboard in his criticism. The Aquarius wasn’t as bad as he made out. But, it has to be said, it was something of a toy computer from a toy company.

But why shouldn’t a toy company - Mattel - get involved in the home computer market? Dragon Data founder Mettoy was one too, and it jumped into the market because it realised that the computer was going to play a huge part in kids’ lives.

Mattel’s involvement in the emerging home computer market of the early 1980s goes back to its decision that it could not possibly allow Atari to own the market for TV-connected home games consoles.

Atari launched its ground-breaking Video Computer System (VCS) - later the Atari 2600 - in 1977 as a direct response to Fairchild’s Channel F console, which went on sale 13 months earlier. The VCS was by far the more successful of the two, and certainly more than their predecessor, the Magnavox Odyssey, launched in May 1972.

Some 250,000 VCS units were sold in 1977, but that figure more than doubled in 1978 to 550,000 units - though Atari had manufactured many, many more leading to something of a cashflow crisis, which led to the ousting of founder Nolan Busnell. Atari's sales doubled again in 1979, prompting Fairchild to throw in the towel. The Channel F was independently revived in 1980 by Ziron.

Fairchild’s downfall in the home games market made Mattel wonder whether its own decision to enter that arena was the right one, and there was a moment in 1979 when development work on its own product was put on hold. In the previous year, Mattel’s engineers had been busy working on what eventually became the Intellivision Master Component console. But with jitters past, the completed console was released in 1979 in one city - Fresno, California - to assess the demand and evaluate how to market the machine across the US. The full-scale North American rollout began in 1980, though it would be two more years before the Intellivision came to the UK.

Mattel decided early on that it should pitch its product not merely as a games machine like the Atari, but as the basis for a complete, expandable home computer. When owners tired of playing games on their TV, the notion went, they could extend the Intellivision with the Keyboard Component: not simply an add-on but a full 64KB 6502-processor-powered computer in its own right complete with cassette connectivity and a bay into which the games console slotted. It was codenamed Blue Whale and developed by a team under David Chandler, who had overseen the work on the Intellivision console.

It’s not known how many Intellivision buyers chose the machine because of this promised expansion option, but the console’s sales were as strong as Mattel hoped, rising to a peak of 500,000 units shifted in both 1981 and 1982. By the time it was discontinued, in 1984, some three million Intellivision consoles had been sold.

By then, of course, the market was very different from what it had been in 1978 when Mattel first appraised the home computer and gaming arena. Four years on, it was clear the public was gaining an interest in computers rather than consoles, especially here in the UK. Mattel’s Intellivision Keyboard Component might have helped the company take advantage of this trend, but it was still a no-show. Originally promised to arrive in the spring of 1981, the unit proved harder to build to a sensible price than Mattel’s engineers had expected, repeatedly stalling the unit’s release schedule. It may well have been responsible for the Intellivision’s late arrival in the UK. 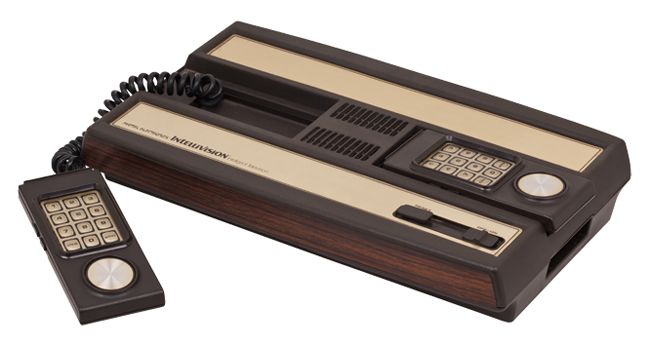 It’s believed Mattel manufactured 4,000-odd Intellivision Keyboard Components, some of which went on sale in trial runs - too few, in any event, to prevent the US Federal Trade Commission (FTC) from fining Mattel in 1982 for repeatedly failing to deliver on its Keyboard Component promises. Reliability problems with the units that made it out of the company’s factories didn’t help. Certain that getting the Keyboard Component right would cost it even more money, Mattel decided enough was enought and canned the gadget in the autumn of 1982.

Fortunately, it had an alternative ready to go: the Entertainment Computer System (ECS), a less sophisticated, cheaper keyboard add-on. ECS development was started in 1981 when it became apparent that the Intellivision Keyboard Component would not be ready on time, but it was also spurred by the idea that a cheaper add-on could land Intellivision sales in schools and with parents keen on teaching their kids programming skills. ECS, codenamed Lucky during its development, lacked the extra processor power and extravagant amount of RAM of its big brother. ECS came with just 2KB of RAM and had BASIC built in.

Next page: Game on
Page: