Digital Compaq HP has announced the end of support for various flavours of OpenVMS, the ancient but trustworthy server operating system whose creator went on to build Windows NT.

OpenVMS started out as VAX/VMS on Digital Equipment Corporation's VAX minicomputers, then later was ported to DEC's fast Alpha RISC chips – before the Compaq acquisition of Digital led to their untimely demise.

HP, which snapped up Compaq, ported the software to the Itanium, but the tech titan isn't going to bother moving the code to the latest, and perhaps last, generation of IA64 chips: and thus official service support for Alpha and Itanium OpenVMS pre-version 8.4 will finally end in 2015 (roadmap PDF); support for Alpha and Itanium OpenVMS v8.4 will live on to 2016 and 2020 respectively.

A very popular business OS in the late 1970s and 1980s, VAX/VMS ended up on minicomputers from small to mainframe-sized as well as personal workstations, running the X Window System and CDE desktop. As the VAX architecture aged, DEC ported it to the new Alpha chip, giving OpenVMS-Alpha a new lease of life in which it supported AGP graphics cards and OpenGL. 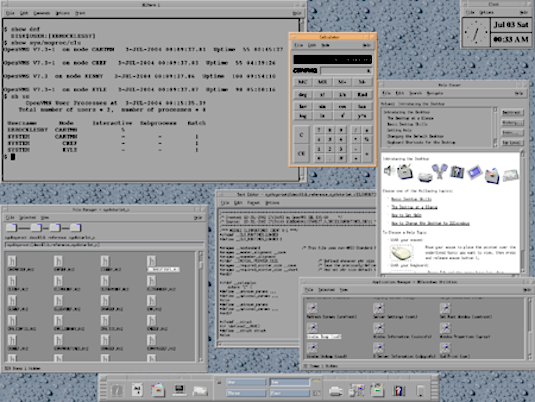 OpenVMS also sports world-class clustering abilities, allowing a whole group of dissimilar machines to function as a single server, leading to uptimes of many years as individual machines can be taken offline, their hardware or even entire OS upgraded or replaced, then brought back up and to rejoin the cluster. A single cluster could contain mixed hardware architectures and mixed OS versions, allowing a level of flexibility no other OS has ever matched.

It also ran LAN Manager, the basis of Windows NT networking, in the form of DEC's Pathworks suite to act as a server to PC networks.

The architect of RSX-11M and VMS was Dave Cutler, who planned a portable, object-oriented successor, Mica, running on hardware codenamed Prism. When DEC wasn't interested, he and some of his team decamped to Microsoft, where they were given the project of reviving the moribund OS/2 3 project after the IBM-Microsoft split. While OS/2 2 was the Intel 386 version, OS/2 3 was to be portable to non-x86 processors. Cutler drew upon his previous Prism and Mica work to bring Microsoft's OS/2 3 to the Intel i860 CPU, a RISC/VLIW chip Intel had hoped might be a successor to the x86 line.

There were two versions of the chip – the basic i860XR, codenamed the N10, and the enhanced i86XP, codenamed N11. Microsoft built its own i860 workstations for the development effort, based around the i860XTR and consequently nick-named the "N-Ten". The initials of these – NT – is where the eventual name for Cutler's finished OS: Windows NT.

In a way, this brought the family full-circle, as the original progenitor of MS-DOS was Digital Research's CP/M, itself also inspired by a DEC OS – TOPS-10 for the PDP-10. This is where DOS and Windows get command names such as "DIR" and "SET" and their original eight-dot-three-letter filenames from, along with file types such as ".TXT" and ".EXE".

HP never really promoted its acquisition and OpenVMS suffered from a lack of development compared to HP-UX, itself suffering from competition from Linux. It was only a matter of time, but it's a sad end. Many of its old-time fans, your correspondent included, cherished a hope HP would move it to x86-64 – but since development moved to India in 2009, OpenVMS has been living on borrowed time. Now, as HP signalled this month, it's run out. ®