Comment If you're an AAPL shareholder, there are reasons to be deeply troubled by last night's WWDC announcements of new Macs, OS X 10.9 and iOS 7.

It was widely believed that "Apple was unmanageable" after its mercurial, driven co-founder Steve Jobs departed in 1985 - without Jobs, egos ran rampant and chaos ruled. Apple in 2013 is in much better shape, as Jobs ran a disciplined ship for years, and groomed his successors. But egos are once again running rampant.

The new iOS 7 was the first statement of intent from a post-Steve Jobs Apple. The long wait was over. And what did Apple tell us?

Firstly, that it has outsourced its design to Seattle, Mountain View and Waterloo, Ontario. The iOS 7 overhaul brings in long overdue changes but "borrows" liberally from - if you're being generous, otherwise you may prefer "has ripped off" - designs and features from its smartphone competitors Microsoft, Google and BlackBerry. There are even a few bits of WebOS in there.

It's from Microsoft that Apple has borrowed most heavily. How ironic that is! The overall cosmetic look of iOS in 2013 is that of Windows Phone in 2010. The emphasis in iOS 7 is on typography: using a large sans-serif font, replacing captioned buttons with unadorned text labels, and removing shadows for a flat look. That's pure Metro. Oops, sorry: Modern UI.

From Android there's a quick shortcuts panel - the "Control Center" and an improved Notification Center - which Apple originally plundered from Android in 2011. From WebOS and BlackBerry's BB10 Apple has "borrowed" layering - the idea that one window overlays another, allowing you to "peek" at what's underneath with a single gesture. It also "borrows" the top-to-bottom gesture. The new iOS 7 task-switcher works very much like the WebOS card deck.

Many of the changes are necessary and long overdue - iOS had atrophied in recent years as nimbler competitors were forced to be creative. Some iOS 7 headliners, like the new quick access shortcuts panel, and giving task-switching a nicer display and new gestures - are simply no-brainers. These should have been introduced and overhauled (respectively) years ago.

Few iPhone users will complain about "stealing", and many will wonder what took so long - their Android-carrying friends seem to take these for granted. For example, at our old office I could see staff pour out of the building at lunchtime, frantically poking at their iPhones to turn off the WiFi before it latched on to some Wi-Fi hotspot network that the iPhone decided it had "an affinity with" but to which they weren't subscribed, which resulted in a clogged data connection.

That scene would be replayed in thousands of offices around the world. On rival systems it was easier to do this. On Motorola Android phones and with Nokia's Situations you could trigger the phone to shut down WiFi automatically on a given context, such as location or signal strength.

So "borrowing" won't concern most people - but it is certainly deeply hypocritical, given that Apple continues to spend vast sums litigating against others who "borrow" Apple's now out-dated UI features.

So where's the beef? That's the first sign of trouble. For, apart from the misleading named "Radio" music service and a beefed-up WiFi sharing feature called AirDrop, there really isn't very much. Radio is very me-too, while AirDrop is something very familiar to Lion users and available via third parties. The iPhone 6 isn't ready yet; and while it may contain wireless payments and wireless charging, Apple isn't giving anything away.

For three years Apple used WWDC in the first week of June to reveal a new iPhone (3, 3GS, 4). Since Steve Jobs checked out, it's slipped to autumn. Not a good sign. So long overdue hardware advances like wireless charging and bonk-to-pay, where Apple's late entry can be a good thing for the industry, since it cements a standard - will just have to wait.

The real reason for concern, and a sign that egos are running out of control, is best explained by a few illustrations of how Apple is marketing the makeover. Here's the main page. Notice anything in particular? 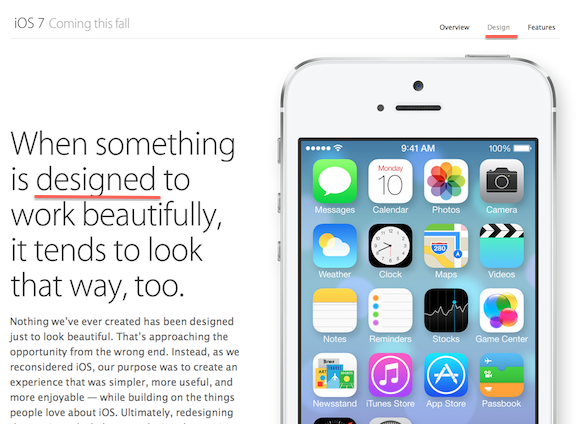 It wants to tell you about the great new Design. Yes, Apple employs a Designer. Maybe several. And features? Well, don't bother yourselves with those just yet.

Further down we find this: 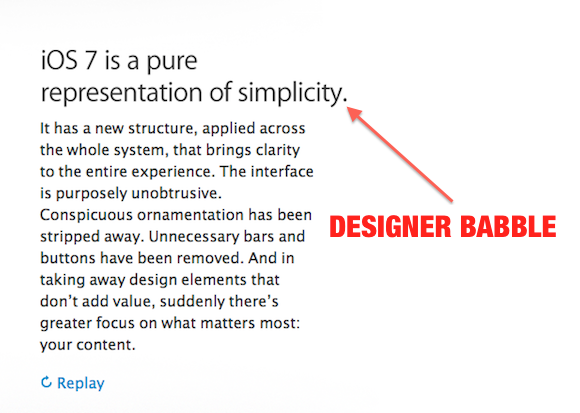 That's the kind of gibberish that can only come out of the mouth of a Designer, trying to impress a client. Parse it closely, and it doesn't actually mean anything.

And if you're getting the creeping uneasy that an egomaniac has taken over Apple's website, this should dispel any doubts: 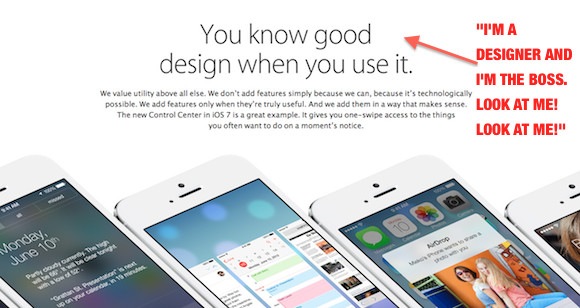 Yes, we get the idea, Sir Jonathan.

And here's the kind of reaction he probably dreamed of, from blogger John Gruber, a favourite of both the die-hard fanbois (F) and pixel wankers (W). There is a considerable overlap (F ∩ W) on the F and W Venn diagram. 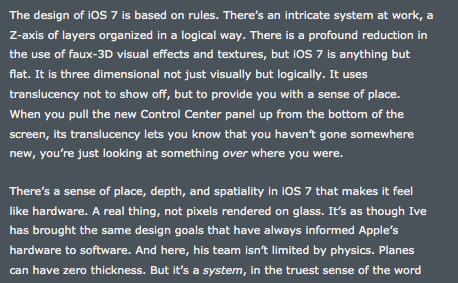 But not everyone is a die-hard devotee, for whom every design change Apple makes is for the best. The reality is a little different.

As a happy iPhone user for over three years, I had very little difficulty getting along with the icon set. The Address book icon was plain and er, brown. The Settings was dark and had sharply defined gears on it. Distinguishing the (green) Phone icon from the (green) Messaging icon took a few milliseconds longer perhaps, but didn't really tax the brain cells. You could probably take mind-bending chemicals for hours, where you imagined you were surrounded by goblins and Gods (I didn't try) and still not struggle to work out the iPhone's icons.

What do we see here?

Well, the voice recorder is obvious enough - it's got a old-style microphone on it. But what in buggeration are the rest? The top left icon must be some kind of game. Obviously. The other two are … Well, I'm not sure. Eye tests? A couple of apps for a Bridget Riley exhibition? Answers on a postcard, please.

I'm not alone here. The Verge's editor thinks it's been "beaten with an ugly stick" - and he's as confused as I am.

Now, this matters, because, there are several kinds of design.

One is the ostentatious kind, which reminds you of the designer every day you look at it. This is exemplified by the Apple G4 Cube, a bravura piece of work which I liked so much that I have, over the years, had several - as I wrote about, at length, here.

But most great design isn't like that - it isn't ostentatious at all. It's so subtle that it's actually "invisible", as designers like to say - you don't notice the design, or the designer. You're just aware something feels right or works well. This is difficult to achieve, and it's the very antithesis of the showy, look-at-me aesthetic of this New Ives Era. Good design doesn't need to tell you what a genius the designer is - on every paragraph of the site. Perhaps some egos are more insecure than others?

So, instead of waking up to some ambitious new vision from Apple - imagine taking, say, the people-centric social integration features of Windows Phone and building on it - we're waking up to a company that looks alarmingly like the Apple of 1987. Awash with cash, incredibly smug, and with key figures rampaging, like Godzilla, all over the landscape. ®