What happens in Vegas won't stay there - we've got the details

It uses the same operating software as other 3PAR arrays and the same ASIC-accelerated hardware architecture. HP says it features: 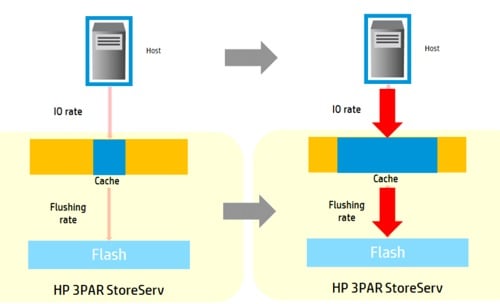 The 7450 can have between two and four Fibre Channel and iSCSI controllers, each with its own Gen 4 ASIC. The quad-controller design has "persistent cache, persistent ports, peer-based stretch cluster for data centre failover, and multisite replication capabilities."

HP says the 7450 is fault-tolerant and has high-availability features, including disaster recovery.

Access to this array is via 16Gbit/s Fibre Channel, branded StoreFabric, and there is a 48 to 96-port StoreFabric SN6500B B-Series switch with 4, 8 or 16 Gbit/s bandwidth

HP suggests the 7450 can be used for on-line transaction processing applications and other IO-centric web 2.0-style applications. VDI is an obvious example, and another is rapid analysis of large amounts of data. Check out a set of QuickSpecs (45-page PDF) over on HP's website.

The software portfolio available for the 3PAR arrays has three new features:

HP has enabled Android phone users to monitor HP environments with a StoreFront Mobile Access app with which they can:

The StoreEver MSL6480 library grows from 80 to 560 LTO slots with expansion modules providing cartridge slots, drives and continuous robotics. There can be up to 42 drives. HP says the capacity range is from 240TB to 3.5PB and the maximum bandwidth is 60.4TB/hour. It supports up LTO-6 media with a 6.25TB compressed capacity (2.5:1).

There is a pay-as-you-grow pricing model.

HP has also announced that the larger ESL G3 library has a capacity expansion module taking it from 7,104 slots to 11,600 slots using a drum-style design with slots inside it.

StoreOnce has federated deduplication and "data is deduplicated once using a single technology, without being rehydrated or uncompacted in as it moves between different HP StoreOnce based systems."

The eighth version of HP's data protector software can run "as many as 100,000 sessions per day," according to HP. It can:-

It also has a bandwidth control capability that allows administrators to configure a maximum bandwidth limit for the backup process. This means you can stop it using up all the available network bandwidth it has access to and so avoid having a dedicated backup network.

The 3PAR StoreServ 7450 arrays available immediately at a starting price of $99,000. The Priority Optimization Software, Data At Rest Encryption and Recovery Manager for Hyper-V will be available in late June. StoreFront Mobile is available at no charge from the Android app store.

StoreFabric SN6500B Fibre Channel switches are available now in four configurations, starting at $73,999 for the base one.

The HP StoreEver MSL6480 scalable base module is available immediately at an entry price of $30,000. HP Data Protector 8 is available at a starting price of $1,238. ®

UK Oracle users are all of us: They care more about Brexit and the pandemic than, say, cloud transitions

On the other hand, they're not going anywhere, so it's win-win for Big Red

Here's some words we never expected to write: Oracle said to offer $10bn cash, $10bn shares for TikTok US – plus profit share promise

When Larry said he wanted the app, he meant on his phone, not... oh God