Before CEO Tim Cook handed over the iOS 7–introduction chores to other Apple execs at the company's Worldwide Developer Conference, he took a moment to slag Android and its OS fragmentation in an appeal for the hearts and minds of developers.

"This version fragmentation is terrible for developers, as many of you know," he told the devs attending his WWDC keynote presentation in San Francisco on Monday.

"In fact," he said, "if you do the math, you would find that iOS 6 is the world's most popular mobile operating system, and in second place is a version of Android which was released in 2010."

According to Cook – and a slide his marketeers whipped up for the occasion – iOS 6 is now installed on 93 per cent of the 600 million iDevices that Apple has shipped. Cook compared that with 37 per cent of Android devices running Gingerbread, 26 per cent running Ice Cream Sandwich, and 33 per cent running the most recent version of Android, Jelly Bean.

These numbers include only "those versions of Android that talk to the Google Play store, so it doesn't include things like Kindles and Nooks," Cook said. "But even then, it's a pretty bleak story." 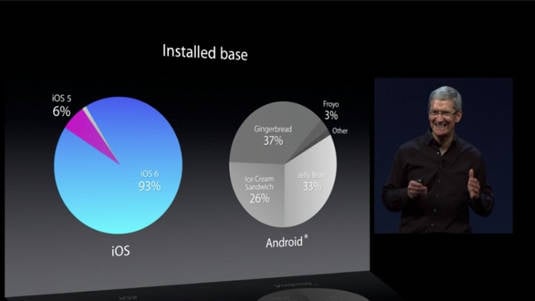 Cook also told the assembled developers that iDevices are used for more minutes per day than Android devices. "iPhone users use the iPhone 50 per cent more that Android users use their phones," he said, citing a study by Experian.

"Now this is incredible, but maybe not surprising," he said, eliciting chuckles from his crowd of iOS-loving devs.

"It probably doesn't surprise you if people are using them more," he said. "They love them more." To prove this point, he cited a ChangeWave survey that found a 97 per cent level of customer satisfaction among iOS users. 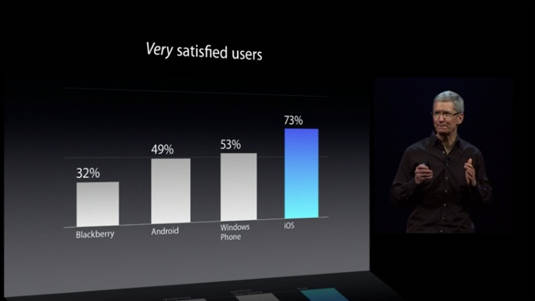 Pity the poor unloved folks at BlackBerry (click to enlarge)

"And if you look at those people that responded that they're very satisfied," he said, "and really look at the detail – which I'm sometimes known to do – you would see that iOS blows out everyone else. Twenty points better than our closest competitor, and almost 25 point better than Android."

He also served up the true meat and potatoes of iOS development to his audience: the money they can make by developing for iOS. Apple, he said, has now paid a total of $10bn to developers. "And the momentum is incredible," he said. "We paid out five billion of that in just the last year." 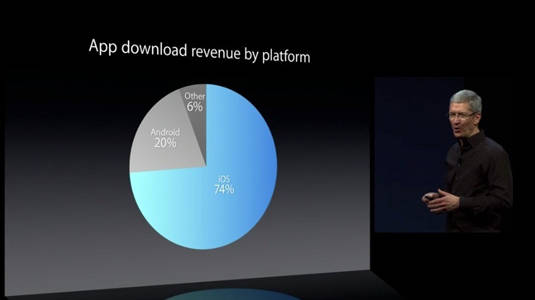 'Want mo' money? Develop for iOS,' says Cook – in so many words (click to enlarge)

While mentioning a competitor by name is not unheard of in executive presentations, many that your Reg reporter has attended don't specifically provide such a level of detail – AMD and Intel, for example, do occasionally mention one another, but more often than not they simply refer to "our competitor," and let you figure out the obvious reference.

But when attempting to keep his all-important developer cadre in the iOS fold, Cook breezily disregarded your sweet mum's advice: "If can't say anything nice, don't say anything at all." ®