Duplicate file killer Actifio has been summoned by Gartner's sorcerers to appear in their magic quadrant of who's who in enterprise backup.

Wait, NetApp? You'd think NetApp should be up in the leaders' box where we find CommVault top of the heap and EMC, IBM and Symantec all duking it out there instead. Instead it's a visionary, Gartner's wizards say: "Foundational to NetApp's data protection strategy is the ability to take numerous, space-efficient snapshots without incurring a performance penalty and thus adversely affecting users or applications."

But these aren't enough on their own, and NetApp "has a joint development activity that expands on CommVault's Simpana platform that is called SnapProtect, which is now NetApp's premier recovery solution", we're told. Also "NetApp has deep relationship with backup vendors such as Asigra, CommVault, IBM, Symantec and Syncsort to allow greater exploitation of NetApp snapshot and replication management via these backup products".

So NetApp isn't providing the upper layer of software, as it were. What about newcomer Actifio? Gartner's people sums it up like this: 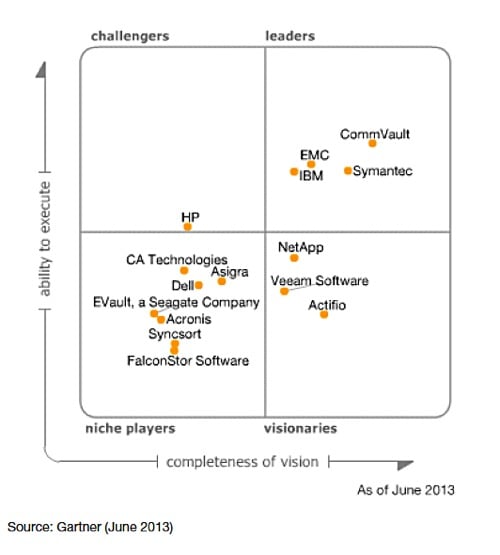 Dell is a newcomer to this quadrant through its purchase of Quest Software, which was previously on the grid. Veeam is in there thanks to its good virtual server backup capabilities. For example, we're told, "it was the first virtual-machine backup solution that combined backup and replication and embeds deduplication".

What about the challengers' box? There's only HP in it, in splendid isolation, and only just, as it is a smidgin over the dividing line between challengers and niche players. The niche player box is jostling with players: CA, Asigra, Dell, EVault, Acronis, Syncsort and FalconStor.

Comparing this Gartner quadrant - which as you can see sets out who's talking the talk and walking the walk in the industry - with the DCIG virtualised server backup buyers guide could be an interesting exercise. ®