MySpace, the Justin Timberlake-owned social network that refuses to die, is back yet again with a new desktop interface – and minus several years of users' blogs and comments.

It's all about music streaming and discovery, much to the chagrin of loyal users who've seen years of blogging disappear at a stroke as the platform narrows its focus.

The new interface has been in closed beta since January, and ticks all the right boxes for a 2013 web service: multimedia content, huge scrolling panels and control bars which flick up on mouse over. The iOS app is equally functional, though the "mobile-optimised" web version (for other platforms) wasn't functioning when The Register tried it last night, or this morning.

Myspace claims the internet's biggest streaming music library, with 53 million songs on tap, but it is now competing with services like music-hosting platform SoundCloud and Brit operation Songkick. All of these services offer bands analytics with which to weigh and measure their audiences, in the hope of getting them to contribute to the library of available content.

Myspace still has scale as its biggest advantage over the newcomers, though, and a quick wander through the aisles reveals a surprising wealth of content; surprising, that is, to anyone who thought that Myspace went out of the window in the late 2000s, along with things like the Yellow Pages.

In 2005 the social network had 20 million registered users, and was owned by Rupert Murdoch's News International, who paid $580m for its parent company. But within a few years it had stagnated as the cool kids moved to Facebook, following a brief but meaningless dalliance with rival social network Bebo.

In 2011 News International cut its losses by selling Myspace for $35m to Justin Timberlake and Specific Media.

Since then user numbers have slowly increased, and this redesign will help; even if it's annoyed old hands who've seen their collection of blog postings and comment threads disappear without warning.

Explaining the changes, Myspace explains that customised home pages aren't part of the brave new world, but the lack of warning has proved upsetting for many old Myspace hands: 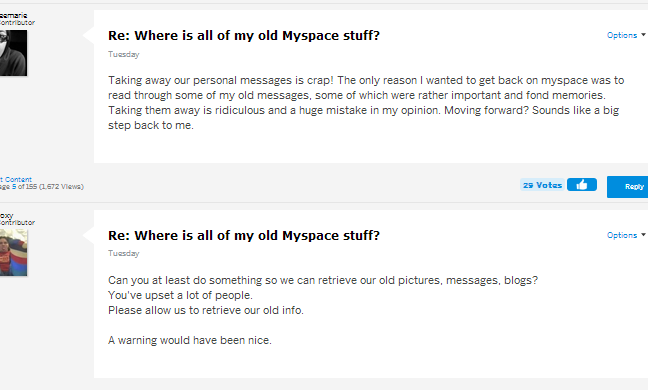 Myspace might not lament the loss of users who only came back to read their own postings, but it highlights an interesting point about all social media platforms. What you post can vanish at any time, and emotion-laden rants content remains available solely at the whim of the site owner – which could surprise a generation brought up to expect everything on-demand.

Myspace could relent; there's no indication that the content has been binned, and backups could be dispatched to customers wanting to leaf though their digital past. But that's not part of the future – if, indeed, Myspace still has a future. ®