Product showcases 'must be seen to be believed'

"It's something that has to be seen to be believed," said Microsoft chief marketeer Chris Capossela.

The new shops will be called Windows Stores – as opposed to the standalone Microsoft Stores – and they will range in size from 1,500 to 2,200 square feet, according to a press release issued on Thursday.

Microsoft will use the locations to showcase a range of products from itself and its partners, including Windows-based tablets and PCs, Windows Phones, Microsoft Office, and Xbox, among others.

"The Windows Store offers a large-scale, hands-on customer experience that will show customers how Windows and Microsoft devices and services can make it easier for them to work and play," Windows CFO Tami Reller said in a statement – the various difficulties of play being particularly vexing, we presume. 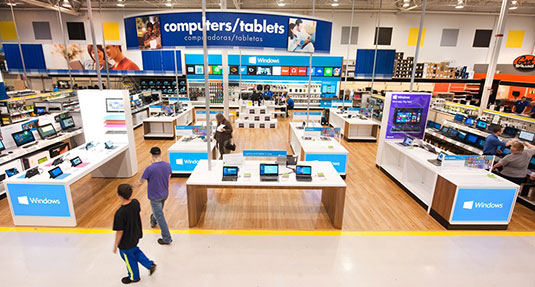 Lest you not believe reports of Windows Stores, we thought we'd let you see one (Source: Microsoft)

Microsoft will provide training for an additional 1,200 salespeople to staff the stores; their jobs will be to provide demos and help customers understand how to work with Microsoft products – er, that is, "to let them see how Microsoft technology can enhance their lives."

There will also be an "ecosystem section" in each store that showcases use cases across multiple Windows devices, such as sharing a SkyDrive account between PCs and phones.

In an interview, Capossela said the partnership between Microsoft and Best Buy will even extend beyond the Windows Stores themselves, to allow Microsoft an enhanced presence in other departments.

"It also means we will have a great Windows tablet table inside the Best Buy Tablet Department, Windows Phones in their Phone Department, and lots of space for Xbox in their Gaming and Home Theater Departments," he said. "So there will be a big Windows experience where we bring everything together, but we'll also look great in the other departments where people go."

In addition, Best Buy and Microsoft will collaborate on a new Windows Store subdivision of the Best Buy website at www.bestbuy.com/windowsstore, which will mirror the in-store experience and provide updates on store locations and marketing promotions.

Microsoft says the Windows Stores at Best Buy and Future Shop locations will begin rolling out "in late June through September." ®