Hoovering a cloud of sand 7.5 billion miles from a tiny star

NASA's Hubble Space Telescope has spotted what appears to be a baby planet sweeping up matter from a protoplanetary disk orbiting a red dwarf star some 176 light-years away from Earth.

If, indeed, this planetary formation activity is what the Hubble's Near Infrared Camera and Multi-Object Spectrometer (NICMOS) has observed, the finding raises a number of questions that could redefine current theories of how planets are born.

First, the evidence: Hubble has spotted a "mysterious gap" of 1.9 billion miles in the 41 billion mile-wide protoplanetary disk circling TW Hydrae, a red dwarf that has been known for some time to be surrounded by a disc of gas and other matter.

That gap, NASA says, is likely being caused by an unseen planet that is hoovering up materials and creating a gap in the protoplanetary disk "like a snow plow."

That's all well and good, but there are a few oddities to this particular youngster. For one, it's exceptionally far from its star – about 7.5 billion miles away, the furthest of any of the 900-or-so exoplanets that we earthlings have yet detected. That would place it about twice as far away from TW Hydrae as Pluto is from our Sun (and yes, we've learned from Randy Newman's "A Few Words in Defense of Our Country" that Pluto’s not a planet anymore). 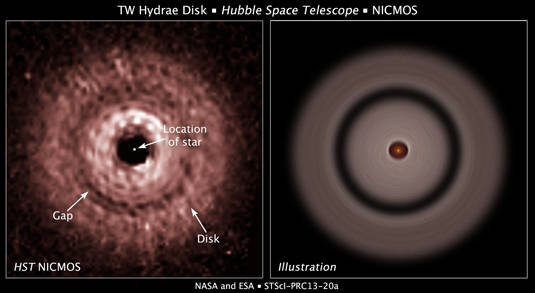 According to observations made by the Atacama Large Millimeter Array (ALMA), the dust in the protoplanetary disk beyond 5.5 billion miles from TW Hydrae, well short of the gap, is roughly the size of grains of sand.

"Typically," said John Debes of the Space Telescope Science Institute, who led the gap-finding team, "you need pebbles before you can have a planet. So, if there is a planet and there is no dust larger than a grain of sand farther out, that would be a huge challenge to traditional planet formation models."

And then there's the fact that TW Hydrae is only 8 million years old, and planetary formation takes time – a lot of time. According to NASA, tens of millions of years is a reasonable amount. Due to its slow orbit and diffuse neighborhood, a planet 7.5 billion miles from its star, NASA says, should take about 200 times as long to form as did Jupiter, which is estimated to have taken 10 million years to assemble its gassy self.

Needless to say, if TW Hydrae is but an 8-million-year-old babe, the numbers don't add up.

And then there are the small sizes of both the disk-clearing planet and TW Hydrae itself. The former is estimated to be only between six to 28 times more massive than Earth, and the latter is a stellar pipsqueak, with a mass of only 55 per cent that of our Sun.

"It's so intriguing to see a system like this," said Debes in a bit of an understatement. "This is the lowest-mass star for which we've observed a gap so far out."

It's possible that the planet didn't form in the traditional accretive manner, but its formation was instead initiated when "a piece of the disk becomes gravitationally unstable and collapses on itself," as NASA explains. If this were the case, a planet could form in a relative blink of an eye – say, in a few thousand years.

"If we can actually confirm that there's a planet there, we can connect its characteristics to measurements of the gap properties," Debes said. "That might add to planet formation theories as to how you can actually form a planet very far out."