Review Bewildering. That’s the best word to describe Samsung’s small tablet range. Since the second half of 2010, the Galaxy Tab, Galaxy Tab 8.9, Galaxy Tab 2 7.0, Tab 7.0 Plus and Tab 7.7 blurred one into the other, much to the confusion of the average customer and me.

Thankfully, the Samsung fondleslab now sat on my desk is a Note, not a Tab, the signature difference between the two being the Wacom digitiser-equipped S-Pen stylus. If a tablet has one, it’s a Note. If it hasn’t, then it’s a Tab. 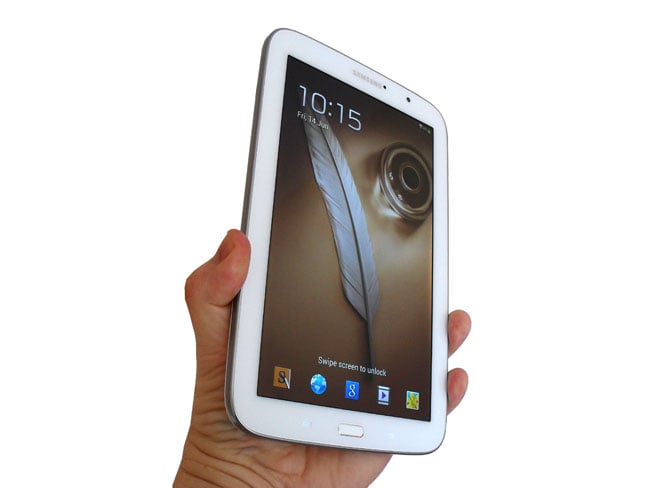 Samsung’s Galaxy Note 8: give it a big hand - it’ll need one

Externally, the Note 8 looks like a pumped-up Note 2 right down to the curvy hyperglaze plastic body and physical home button. And, like the Note 2 and the Galaxy S4, the plastic body makes the Note 8 feel just a little low rent. It’s not as if it pays dividends in the weight department either: at 338g the Note 8 is only 2g lighter than a Google Nexus 7 but 30g heavier than an iPad Mini. But the body doesn’t make fingerprints obvious and it feels very pleasant in the hand.

At 8mm deep and 210.8 x 135.9mm in size, Sammy’s latest tablet isn’t overly portly for an 8-inch device but, again, the iPad Mini is thinner and smaller despite only having a fractionally smaller display. Like the Apple gadget, the Note 8’s battery is fixed in place and the tablet is just a bit too wide to comfortably hold in one hand for a prolonged period.

Name and S-Pen aside, the similarities between the Galaxy Note 8.0 and Note 2 include the chipset, the processor speed, the Android build (4.1.2) and - give or take a few pixels - the screen resolution.

You could argue that 1280 x 800 pixels doesn’t quite cut the 8-inch mustard in this day and age. The resulting pixel density is only 189dpi which while better than the iPad Mini’s 162dpi is well short of the Note 2’s 267dpi, or the 216dpi of the Nexus 7. It’s worth clarifying that unlike the rather uninspiring 8-inch Acer Iconia A1 tablet Reg man Tony tested recently, the Note isn’t a 4:3 device but rather a widescreen-friendly 16:10.

In all honesty though, the display looks pretty sharp and crisp, while the screen size and aspect ratio combined with the broadly curved corners and thin top and bottom bezels - well, thinner than the Nexus 7 anyway - make it a very comfortable device to hold in landscape orientation while watching video or playing a game.

As soon as you turn the Note 8 on you’ll notice that the screen is a traditional LCD panel rather than Samsung’s usual Super AMOLED. This means it lacks the Note 2’s eye-catching vividness and super-saturated colours. As tablet screens go, though, it’s a decent enough pudding: bright, colourful and with reasonably good levels of contrast, though its performance in broad daylight was not spectacular. 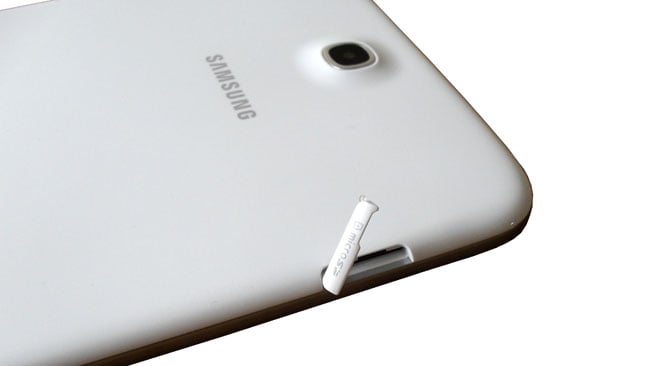 That’s not something you need worry about though. All the 3D games I tested on the Note 8 - Real Racing 3, ShadowGun:Deadzone, NOVA 3 - ran perfectly at maximum definition so this really is a case of synthetic benchmark scores highlighting a difference that otherwise you won’t be able to discern.

The Note 8 runs Android under Samsung’s all-pervasive TouchWiz user interface, but that’s OK because TouchWiz makes more sense on tablets that it does on smartphones. The extra screen area makes it look less cartoonish and gives features such as multi-window apps and floating video player more room to breathe. If you really can’t stomach TouchWiz, all the third-party software launchers I tried worked a treat and didn’t mess with any of Samsung’s bespoke baked-in functionality. 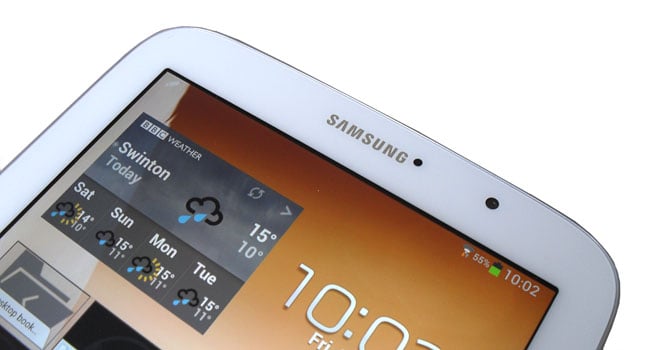 The webcam and the ambient light sensor

In much the same way, the S-Pen also makes more sense when combined with a larger screen. This may have something to do with my wretched handwriting, but the extra space afforded by an 8-inch screen had me reaching for the stylus far more frequently than when I was using the Note 2. The Note 8’s handwriting recognition - toggled directly from the very nice swipe-enabled keyboard - is solid.

As with the Note 2, the oval-profile stylus lives in a slot at the bottom on the device. Slide it out and the Note 8 goes ‘beep’ - thankfully this can be disabled - and a dedicated context menu and home screen automatically opens. The primary apps for S-Pen are S Note, an all-purpose note pad, and Paper Artist, an art app for mucking about with photos. Both are good examples of the breed.

Next page: Scribbles for shortcuts: What works, and what doesn't
Page: