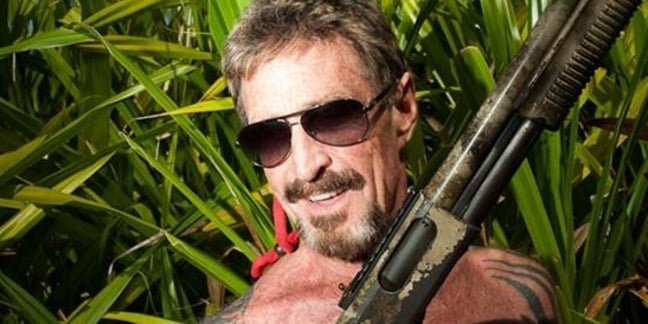 McAfee claims that one of the most frequent questions he's asked is how to get rid of the pernicious software, despite his having nothing to do with the company for the last 15 years. He says he has remembered how to do it and his solution – predictably, given his interests – involves drugs, seven strippers, and a handgun.

"Something went wrong. 15 year ago I had some beautiful software and they took it over, I don’t know what they did but it was like that time I hired that Bangkok prostitute to do my taxes while I f**ked my accountant," McAfee raves, with a powder-stained nose and what appears to be a joint behind his ear, while strippers undress him.

By this time McAfee is clad only in a gun-filled shoulder holster and ratty pajama bottoms. He takes the handgun and pretends to shoot the laptop (with some tragically poor special effects) before strolling off with his arm around a scantily clad, rifle-toting assistant.

McAfee's video credits claim "both of his alter egos" take part in the film, with bit parts allotted to Carmella, Treasure, Diamond, Kimberly, Monroe, Bianca, Quincey, and Sasha from Portland's Club Exotica. McAfee has been hanging out in Portland since his expulsion from Guatemala and it's clear he has been spending his time in some interesting company.

The video could be construed as a swipe at his former company and its current owners, Intel. McAfee has said the current security suite is "the worst software on the planet," but the new video, which looks very likely to go viral based on Reddit activity, is more about self-promotion than revenge, according to security columnist Graham Cluley.

"My guess is that it’s designed to boost his fan following for his blog and Twitter account, rather than to give more headaches to the marketing team at McAfee (the company, not the man) to consider changing their brandname," Cluley said.

"There’s no doubt that John McAfee loves to manipulate the media, and be the centre of attention. This video won’t do him any harm at all in that regard."

McAfee has good reason to be playing the personal publicity card. There's reportedly a film about his life in the works by Warner Bros. entitled "John McAfee's Last Stand," and also rumors of another film deal with Impact Future Media under the provisional title of "Running in the Background: The True Story of John McAfee." El Reg readers have voted Julian Assange the top pick to play him.

Then again, it's difficult to say with any certainty what John McAfee's actual future plans are, since the man doesn't appear to know himself. It's nice of him to provide some entertainment in the meantime, but the PR flacks at Intel and McAfee might want to consider a name change for their security suite to avoid being caught in the publicity cross-fire. ®

'No BS' web host Gandi emits outage postmortem, has 'only theories' on what went wrong

Also reckons that it should 'accurately document the data recovery procedure' for metadata corruption. Y'think?

New MeX-Files: The curious case of an evacuated US solar lab, the FBI – and bananas conspiracy theories

Of course, it's huge sun flares, Chinese spying, or ALIENS

Dodgy outer orbits all down to asteroids and gravity

From attacked engineers to a crypto-loving preacher with a questionable CV: Yep, it's still very much 5G silly season

Roundup When does it end?