If the Republican-led House Subcommittee on Space has its way, NASA's proposed asteroid-retrieval mission will be killed, the agency's budget will be capped for the next two years at about 5 per cent less than last year's, and NASA's Earth observation efforts will be cut back.

In addition, Congressional control over the choice of the agency's administrator – a position that is currently a presidential appointee – will be increased to match provisions outlined in the Space Leadership Preservation Act (H.R. 823), introduced by representative John Culberson (R-TX) this February.

At a hearing on February 27 to review that bill, the Committee on Science, Space, and Technology chairman, former lawyer and rancher Lamar Smith (R-TX) said of the US space agency, "Today, a question exists about NASA's vision, namely, whether there is one."

On Wednesday, the House Subcommittee on Space, chaired by former accountant Steven Palazzo (R-MS), will hold a hearing to discuss the NASA Authorization Act of 2013, which includes the budget and oversight items mentioned above, along with a proposal that would make a manned flight to Mars via the moon a NASA priority.

“It is the policy of the United States that the development of capabilities and technologies necessary for human missions to lunar orbit, the surface of the Moon, the surface of Mars, and beyond shall be the goals of the Administration's human space flight program,” the Authorization Act states, SpaceNews reports. 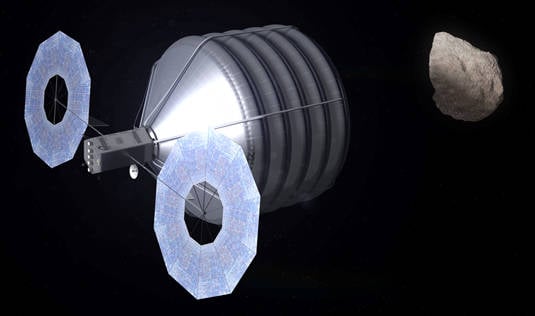 That asteroid-retrival mission, and presumably the solar-electric propulsion vehicle that was to propel it? Fuggedaboutit. "The Administrator shall not fund the development of an asteroid retrieval mission to send a robotic spacecraft to a near-Earth asteroid for rendezvous, retrieval, and redirection of that asteroid to lunar orbit for exploration by astronauts," the Authorization Act decrees.

The Orion Multi-Purpose Crew Vehicle and Space Launch System (SLS) heavy-lift rocket that the asteroid-retrieval mission was to piggyback on, however, were saved from the budget axe. Orion gets $1.2bn in the Authorization Act and the SLS gets $1.772bn. Also living to fight another day is the James Webb Space Telescope, which would receive $658m in 2014 and 2015.

The NASA Authorization Act of 2013 is not, of course, a done deal – the Senate still needs to get its version of a NASA budget authorization together, and sources told SpaceNews that it could do so as soon as this week. Sources also said that the Senate is planning a five-year authorization, and that it plans to be more generous than the House.

And then there's the White House. An Obama administration official requesting anonymity told SpaceNews that the Authorization Act was a "non-starter", notably because of the cancelation of the asteroid-retrieval mission and the Act's 30 per cent cut in funding for Earth Science, the NASA program that collects data on our home planet.

Considering the Republican-led House of Representatives' dim view of NASA's climate-science activities, that proposed 30 per cent budget cut should come as no surprise. ®

It is ironic that as the details of the Authorization Act of 2013's binning of NASA's proposed asteroid-retrieval were being made public, the space agency was announcing a Grand Challenge to "harness public engagement, open innovation and citizen science" to detect and characterize potentially Earth-threatening asteroids.

Find them, yes, but lasso one and put it into lunar orbit? Not if the House Subcommittee on Space can stop it.