Trebles all round for the Boys from Boise

Hip hip hooray! Flash and memory fab operator Micron has made a quarterly profit, its first for eight quarters.

Obviously the boosted sales revenue enabled that profit, but where did this quarter's extra revenue come from?

Micron CEO Mark Durcan said both the DRAM and NAND markets showed an improvement in their fundamentals. He reckons the purchase of the distressed Japanese DRAM fabricator Elpida will complete in the fourth quarter, giving Micron more clout in the DRAM market. 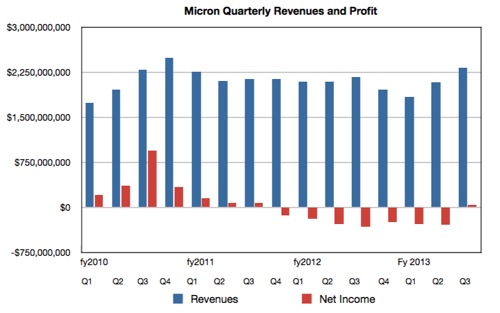 The company is progressing with the development of 3D NAND, with sampling expected during the next few quarters with possible general availability in 2015.

MLC is multi-layer cell NAND; slower than SLC but less expensive, as it has 2 bits per cell instead of SLC's one. Rakers expects Micron to introduce NVMe interface SSDs later this year. These connect directly to a host server's PCIe bus, and Rakers also notes SanDisk should follow suit soon.