New super maxed out on first day of operations

How long does it take to fill a supercomputer? A day, if you're the new Raijin machine at the National Computing Infrastructure (NCI) at the Australian National University.

Formally opened to user traffic on Monday, Raijin is a Fujitsu Primergy system with 57,472 SandyBridge cores, 160 TB of main memory, 10 PB of usable high-speed filesystem space, hooked together with Mellanox FDR interconnect. Two thirds of its nodes have 32 GB of memory, nearly one-third has 64 GB, and two percent of the nodes have 128 GB.

The facility says its peak performance is 1.2 Pflops, and it achieved a six-fold improvement in filesystem performance compared to its predecessor, dubbed Vayu, a Sun Constellation whose 11,936 Xeon cores could only limp along at 140 Tflops.

And how long did it take users to peak the system? One day, according to the NCI's Ben Evans on Twitter.

"Finally released the new NCI Raijin supercomputer for general access earlier this week. Less than 1 day for users to spike to full capacity", he posted.

Half of that consumption was down to one job, as the NCI told El Reg. ARC Future Fellow, Associate Professor Evatt Hawkes, had a code running on 32,769 cores - over half the system.

"NCI is supplying researchers with both the infrastructure and world class expertise required to push the boundaries of innovative research in key disciplines that are of national importance to Australia - amongst these are climate and earth systems science", said NCI director, Professor Lindsay Botten.

The system's admins are now in the process of porting software from Vayu to Raijin. 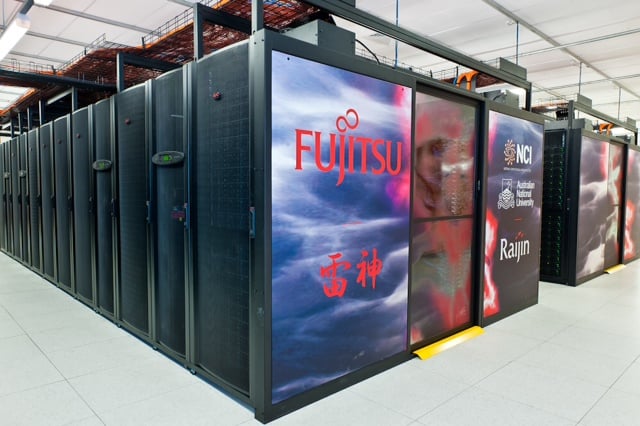 Welcome to the new boss: Raijin at the NCI

Raijin's clients include the ANU, the Bureau of Meteorology, Geoscience Australia, the Australian Research Council, and six research universities. ®

$77m rig will speed up weather forecasts, come online in 2016

Third-party ads to commence this month

OK sunshine, but put it on-prem