Whistleblower Ed Snowden: 'The GCHQ are worse than the US'

The spooks at Brit intelligence agency GCHQ have been secretly tapping hundreds of fibre-optic cables to slurp data, according to leaked documents seen by The Guardian.

This massive interception effort operates under two programs titled, rather modestly, Mastering the Internet (as reported on by El Reg four years ago – Ed) and Global Telecoms Exploitation, The Guardian reported on Friday, based on documents shown to it by Edward Snowden, the deep throat behind multiple reports of mass data slurping by governments both in the US and abroad.

"It's not just a US problem. The UK has a huge dog in this fight. They [GCHQ] are worse than the US," Snowden is reported to have said.

GCHQ is tapping 200 internet links, each with a data rate of 10Gbps, and the agency has the technical capacity to concurrently analyze 46 of these 200 streams of data at a time. It can store all the data generated by the 200 taps for three days, and then the metadata of this for 30 days via a system of what The Guardian terms "internet buffers", which sounds like Tivo, but for all net-traffic, we reckon.

The revelations come alongside reports of the NSA snooping on US and international citizens via the metadata held on them by telecommunication companies, and secret data-sharing agreements between the NSA and consumer-web giants such as Facebook, Google, Apple, and others under the PRISM scheme.

GCHQ's secret efforts capitalize on the UK's position at the edge of Western Europe, by tapping into the vast quantity of data flowing through cables around the UK and abroad.

US and UK Spies have been storing and sifting through vast amounts of this data culled from the fibre-optic cables via an operation codenamed Tempora, which has been running for a year and a half. Over 300 GCHQ and 250 NSA analysts sift through the data, which they use to identify communications relating to security, terror, organized crime, and economic well-being, according to an intelligence source that spoke to The Guardian. 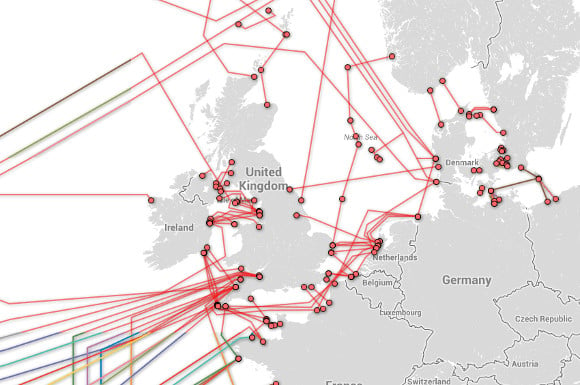 As this map from Telegeography shows (above), the UK is in an enviable position as far as spook-spying goes, with numerous cables making landfall at the UK to sync up with major peering points.

This has led GCHQ to claim it has the "biggest internet access" out of the "Five Eyes" alliance of electronic eavesdropping organizations from the US, UK, Canada, Australia, and New Zealand.

The agency's spying is authorized by a loophole clause in the 2000 Regulation of Investigatory Powers Act (RIPA) that lets the Home Secretary sign off on mass interception of data as long as one end of the monitored communications is abroad – but due to the nature of the internet and how routing works, this happens more often than not.

Refreshingly, this apparent covert spying operation that targets the communications of UK citizens appears to be free of the bureaucratic complications that dog many other Brit government operations, with GCHQ lawyers allegedly telling NSA spooks, "We have a light oversight regime compared with the US". ®