Weather and climate-related disasters in the US during 2012 were the second-costliest since detailed estimates began to be calculated in 1980. Last year's damages were exceeded only in 2005, when four hurricanes made landfall, including New Orleans–destroyer Katrina.

In 2012, 11 such disasters accounted for $1bn or more in damages, with hurricane Sandy ($65bn) and the year-long drought (~$30bn) being by far the costliest contributors to the total financial loss of $110bn. The death total from all 11 events was 337.

Last year's weather and climate-related disasters earned 2012 another number-two ranking: in simple numbers, its 11 billion-dollar events were exceeded only by 2011's 14.

These statistics come to us from a report compiled by the National Climatic Data Center (NCDC), a division of the National Oceanic and Atmospheric Administration (NOAA), and described as "the Nation's Scorekeeper in terms of addressing severe weather/climate events in their historical perspective." 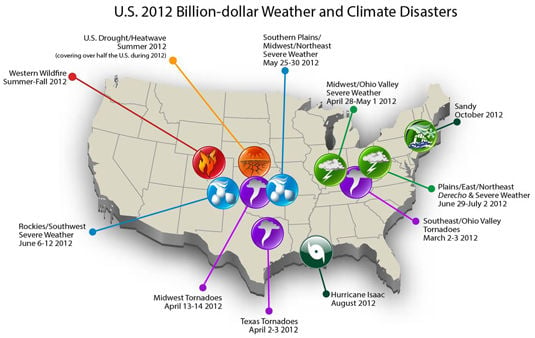 Even with Sandy's damages being about half that of 2005's Katrina, last year was pricey (click to enlarge)

The NCDC publishes a detailed and sortable scorecard, "Billion-Dollar Weather/Climate Disasters" from 1980 through 2012, on its website. It has also said that it is working with economic experts and a consulting partner "to examine possible inaccuracy and biases in the data sources and methodology used in developing the loss assessments from 1980-2012."

As part of that effort, the NCDC's Adam Smith and Richard Katz of the National Center for Atmospheric Research (NCAR) prepared a paper for publication in the journal Natural Hazards that describes the NCDC's methodology and discusses how it might be improved.

In the abstract for that paper, Smith and Katz express the opinion that "The net effect of all biases appears to be an underestimation of average loss."

One interesting bit of information in that paper – which works with a variety of data sets from 1980 to 2011 – is that the overall trend in billion-dollar disasters, when fitted to a trend line, is on the rise: 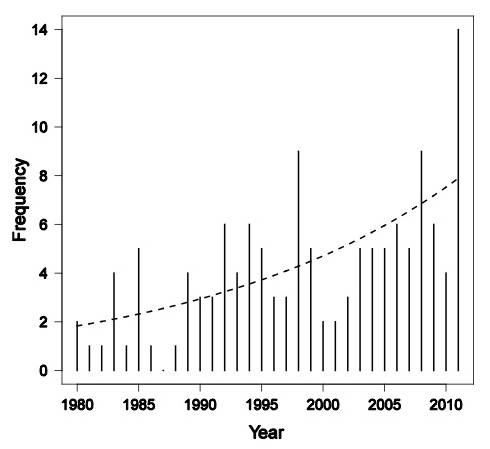 Time series of the annual number of billion-dollar disasters, along with a trend line fitted by Poisson regression

Overall, the NCDC reports that since 1980 the US has been hit with 144 weather and climate-related disasters in which – using what Smaith and Katz argue is a too-conservative estimate methodology – overall damages and costs exceeded $1bn when adjusted for the Consumer Price Index figures for 2012.

"The total cost of these 144 events exceeds $1 trillion," the NCDC reports. ®